Thanks to the latest technology, Land Rover drivers will be able to see through the bonnet of their cars so that any previous invisible hazards will be spotted and avoided. This new Transparent Bonnet virtual imaging concept is predicted to increase awareness while driving as, Land Rover says, the bonnet of the car with become â€œvirtuallyâ€ invisible while sitting inside the car. This will provide a safer means of transportation thanks to the augmented reality. 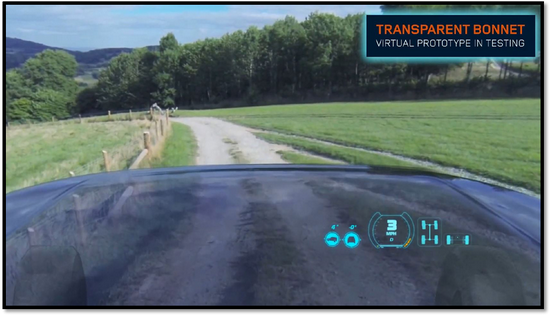 This new exciting Land Rover technology will surely enhance driving performance as the driver will be able to see anything that is underneath or in front of the car, allowing them to see below the typical line of vision. The Transparent Bonnet is just one of Land Roverâ€™s new concept technologies that will be showcased at the New York International Motor Show.

A â€œsee-throughâ€ view of the ground through the bonnet and engine bay will be created by the cameras situated in the grille. The cameras will then transfer the images to a display which is in front of the driver and it will also allow the driver to see which position the front wheels of the car is in. This will be particularly useful when manoeuvring in a small tight space or climbing a steep slope.

“We believe the next 25 years will be the most exciting and dynamic the automotive industry has ever experienced. There will be huge strides in environmental innovation, in safety and capability.”

The launch of the new group of vehicles badged as â€˜Discoveryâ€™sâ€™ will include the Discovery Vision Concept car which will be used to showcase the vision Land Rover has for the new generation of SUVâ€™s. This launch will tie in with the 25th anniversary of the original Discovery and it is likely that it will be named “leisure”, which will sit alongside the new Defender and Range Rover models.

This new innovation from Land Rover could spark a whole new range of cars with â€œinvisibleâ€ bonnets. Only time will tell as to whether this new concept will be as successful as hoped.