How logos have changed over the past decade 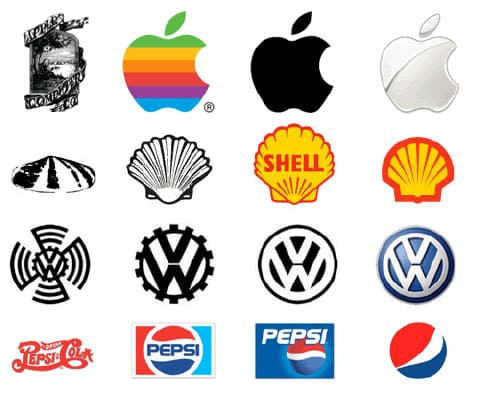 Logos are designed to attract customers, communicate themes or values of the organization, and become markedly memorable. Their design has changed in notable ways over the past decade, with two large driving factors being environmentalism and smartphones. With environmental movements becoming a central focus of many social groups, organizations have needed to shift their marketing to project values of sustainability and social consciousness. Smartphones and social media have introduced an entirely new way of relating to one another, as well as direct to consumer access for companies at any time of the day. Here are some examples

Before the onset of social media, logos consistently included the name of its organization. Recently there has been a marked shift in which logos resemble pictures rather than signs, often a round image rather than text. In addition, they have become notably more colorful, though this shift has taken place steadily since the turn of the millennium. A similar trend shows digital companies changing their logos more rapidly than those whose product is material. As a central focus in logo design for tech companies is relatability, and with their access to metadata, they tend to hold an advantage in directing logo trends. A final, and potentially most important guide to shifting trends is the need to make a logo fit the format of mobile apps.

Take Instagram for example, who’s logo in 2010 was a Polaroid camera. In 2011 it became a combination of a traditional camera and a cell-phone camera, before committing to solely representing a cell phone in 2012. In 2016, having solidified the theme of their logo in customer’s minds, they shifted to a more abstract, colorful, and simple design. It can be presumed that the rise of app-use over the past decade has played a major role in these trends. The Internet has become the primary means through which organizations have access to customers. With much of this time being spent on cell phones, and thus apps, companies such as Instagram have a need for their logo to stand out in a half-inch box on a screen.

As an attention-economy has been built on the understanding that people will compulsively engage with what attracts them, there are many answers to why companies may shift in similar ways to Instagram. Their new logo is inviting and intriguing to new users, relatable and memorable to current users, and casually bright and appealing to look at. As Facebook bought out Instagram, and has since seen Instagram thrive, Facebook has also now chosen to shift the “Facebook” logo to use the colors designed by and for Instagram, while continuing to use their original blue and white “F” logo.

Google has displayed a similar trend as Instagram in the design of their logo. From 1998 through 2014, Google’s logo shifted between variations of “Google” written in its memorable colors. In 2015, as app development became a driving force in tech industries, Google’s logo shifted to the similarly memorable “G,” using the same colors. While the current Google logo primarily represents the search engine, it can be understood as an overall beacon for the world of Google. Again due to app development, Google has merged and split it’s various offerings into a bundle of user-oriented apps, such as Drive, Gmail, Maps, Photos…etc. , each with it’s own logo, most of which contain the same colors. This trend spans through tech, where companies may have many logos, and what holds them together is a very particular color palette.

While simplicity has become a driving force in logo design, the process itself has become increasingly complex. With direct access to analyzed consumer habits, targeted branding has made the logo design representative more of what the user wants than of what the company has to offer. As millennials have become a major consumer base, and guide much of the Generation Z market, company design seeks to be unique, simple, compulsively appealing, and bright. Customers of tech companies find a sense of identity through the products they use, meaning logos need to be simple enough to reach broad audiences, illustrative of how the company fits into the larger world, and unique enough to feel that without this product one’s sense of identity may not be complete.

Younger generations find identity in environmental movements, and with younger entrepreneurs finding capital through newly emerging markets, this has led the trend of the color green becoming a beacon of environmental responsibility. Consumers have seen a spike in green logos with nature-based themes because consumers want to feel confident that they do not have to question their own actions and identity when buying a product. For this reason, a large discussion has been sparked about ‘greenwashing,’ a term used to describe the process of organizations misrepresenting their product through using green messaging to imply environmental responsibility. Greenwashing has become increasingly more prevalent over the past decade, as environmental movements gain increased support and influence; but it has been a corporate strategy for much longer. In 2000, BP launched their new logo alongside a $200 million campaign to highlight their environmental sustainability. Similar trends are seen across the board, from McDonalds to whatever may be coming soon near you.

As the twenties roll around the corner, organizations of all types are looking towards the future and seeking to find attention for what they have to offer. Given how youth patterns with technology have changed in unprecedented ways over the past decade, leading to a shorter attention span, and increased investment in digital identity, logos have become more and more of a ticket into or out of success. People around the world are wondering how humanity will make it through the climate crisis, and are looking towards tech companies for solutions. If trends continue as they have through the past decade, it may be expected that tech companies will continue to lead the pack in regards to what pulls people in, and environmental movements will point towards where people want their money to be going.