Conservatories have been around for hundreds of years, dating back to the 1600’s when wealthy landowners would build them as an extension to their home to grow exotic citrus plants in their homes as a show of status and they remained only for the wealthy all the way up until the 1970s when advances in technology and cheap materials made conservatories relatively accessible, leading to a ‘conservatory craze’ in places such as the UK as the masses sought their own conservatory.

Since then conservatories are still popular today, still essentially remaining a show of class and a status symbol in the UK, when thinking of an idyllic home, most Brits would imagine a nice townhouse, with a sprawling garden and a large white conservatory attached between them both.

So, with conservatories being so popular, you may want to know how to effectively style them, which is why today we’ll be giving you a few top tips on how to decorate your conservatory to create a visually appealing and relaxing space. 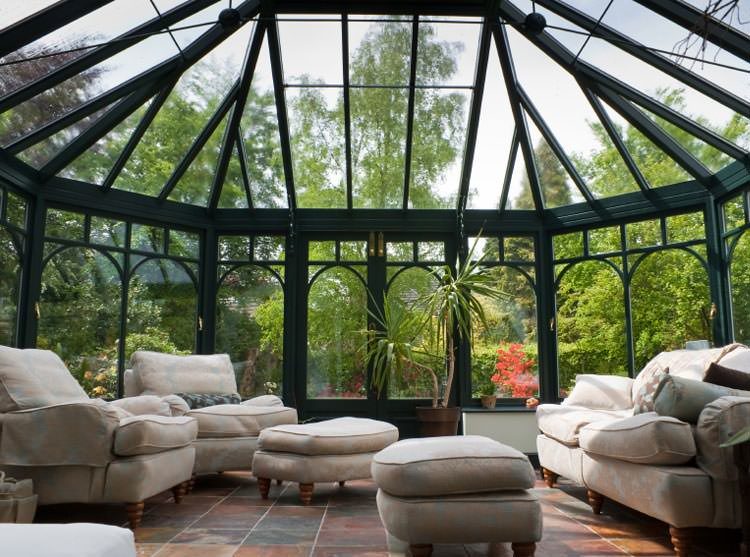 Conservatory Blinds Are A Must Have

Whilst the idea of putting blinds in a conservatory may seem strange at first as they’re often lauded for letting in lots of natural light and staying warm, there is a very important reason as to why they’re an essential… Lots of light and heat aren’t always good, especially in the Summer time when the temperature outside can reach over 30c and the Sun beams down all day long.

As mentioned earlier, conservatories were originally intended for growing exotic plants that otherwise wouldn’t grow in the cold environment of the UK, this remains true today, conservatories are an excellent area to grow a variety of plants as the heat and humidity of a conservatory makes it the perfect grow space.

With hundreds of lovely conservatory suitable plants to pick from, you have a wide range of options, just try to make sure whatever plants you pick match the décor in the rest of the conservatory, for example: If your conservatory has orange curtains, an orange tree would be a good plant to pick, but if you have green curtains, maybe a shrub or green succulent would be more appropriate.

Conservatories, while delightful and usually quite open spaces, don’t have a lot of options when it comes to storage, after all most floor space will be left open or occupied with furniture, so putting up a couple of shelves along the wall that connects the conservatory to your home is a good call.

Having shelfs on the back wall allows you to store in some trinkets and personal items for you to display in the conservatory to add some personal flair to your new conservatory space.