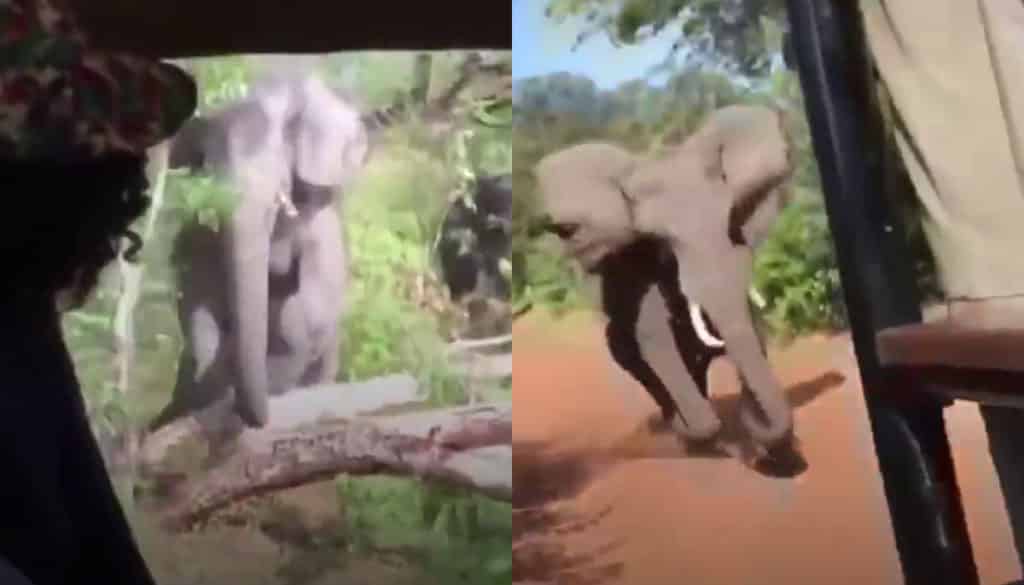 The staff at Chobe National Park in Botswana was bringing tourists on a safari when they came across an elephant and her baby. However, as people took pictures of the incredible moment, the situation turned dangerous. 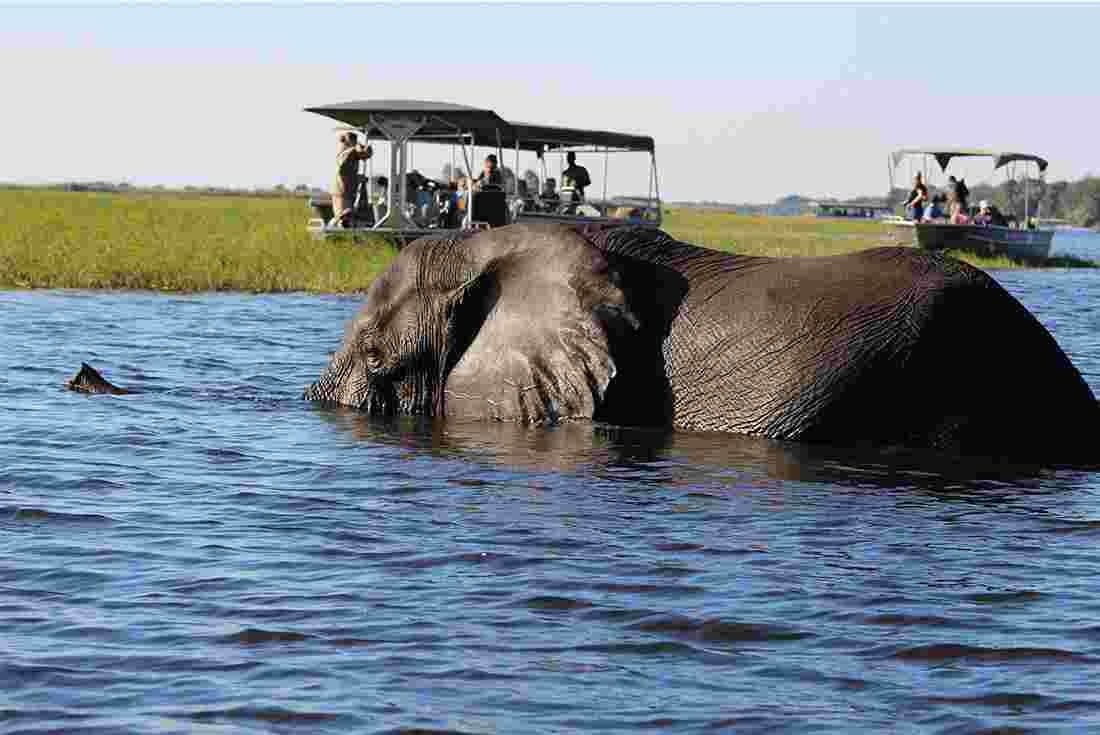 Chobe National Park is located in Botswana and opened in 1968. It covers 11,700 square miles of land where animals can live safely. Over 170,000 tourists come to the park each year, mostly to see their large elephant population. 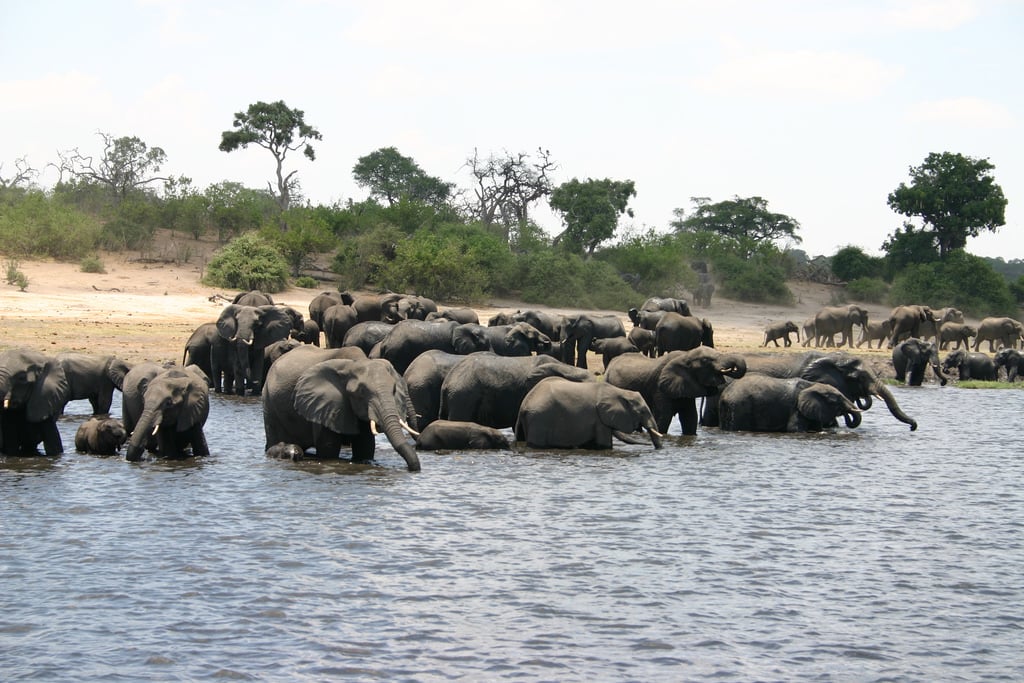 Botswana has a sad and terrible history. Many of its native animals were slaughtered by Europeans in the 19th century. By the end of 1800’s, the elephant population was so low that it took 80 years for it to recover. 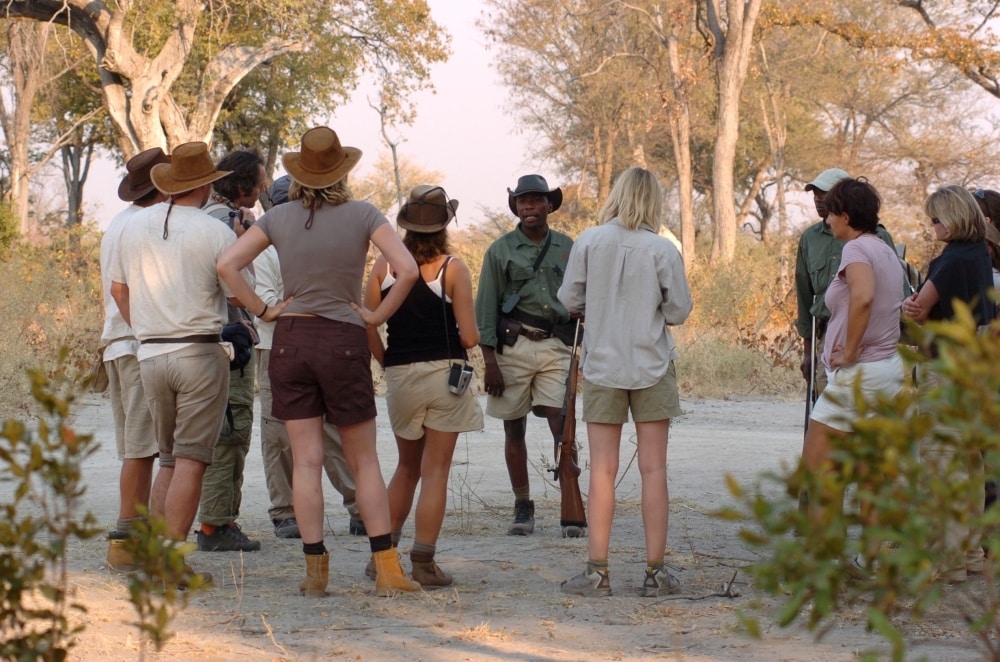 Chobe National Park has keep elephants safe for the last half century. They now have 50,000 elephants living in the park. Tourists can come and experience these majestic creatures up close and personal. 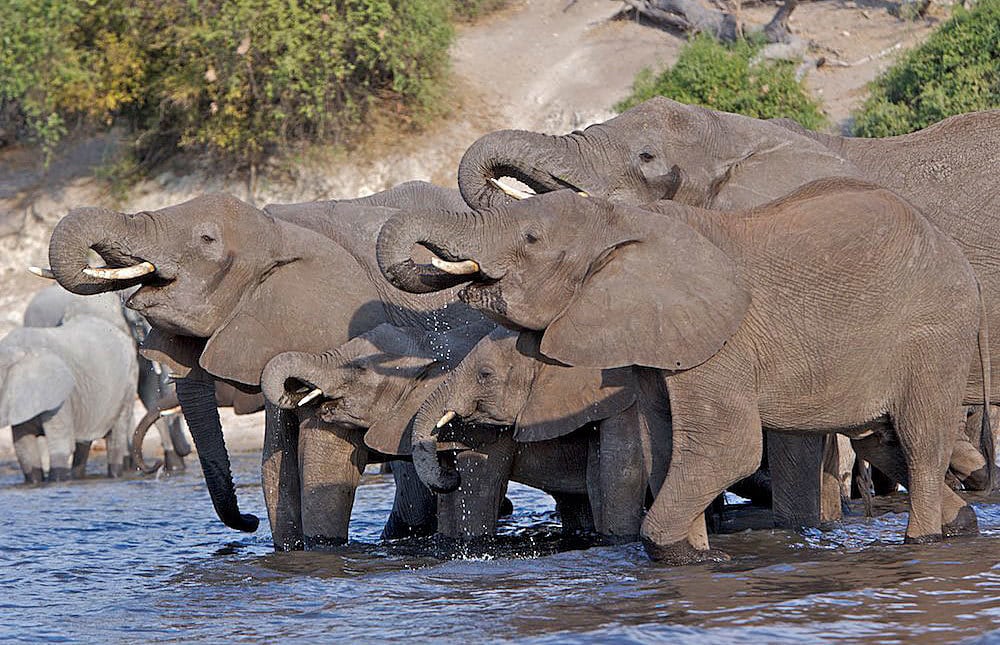 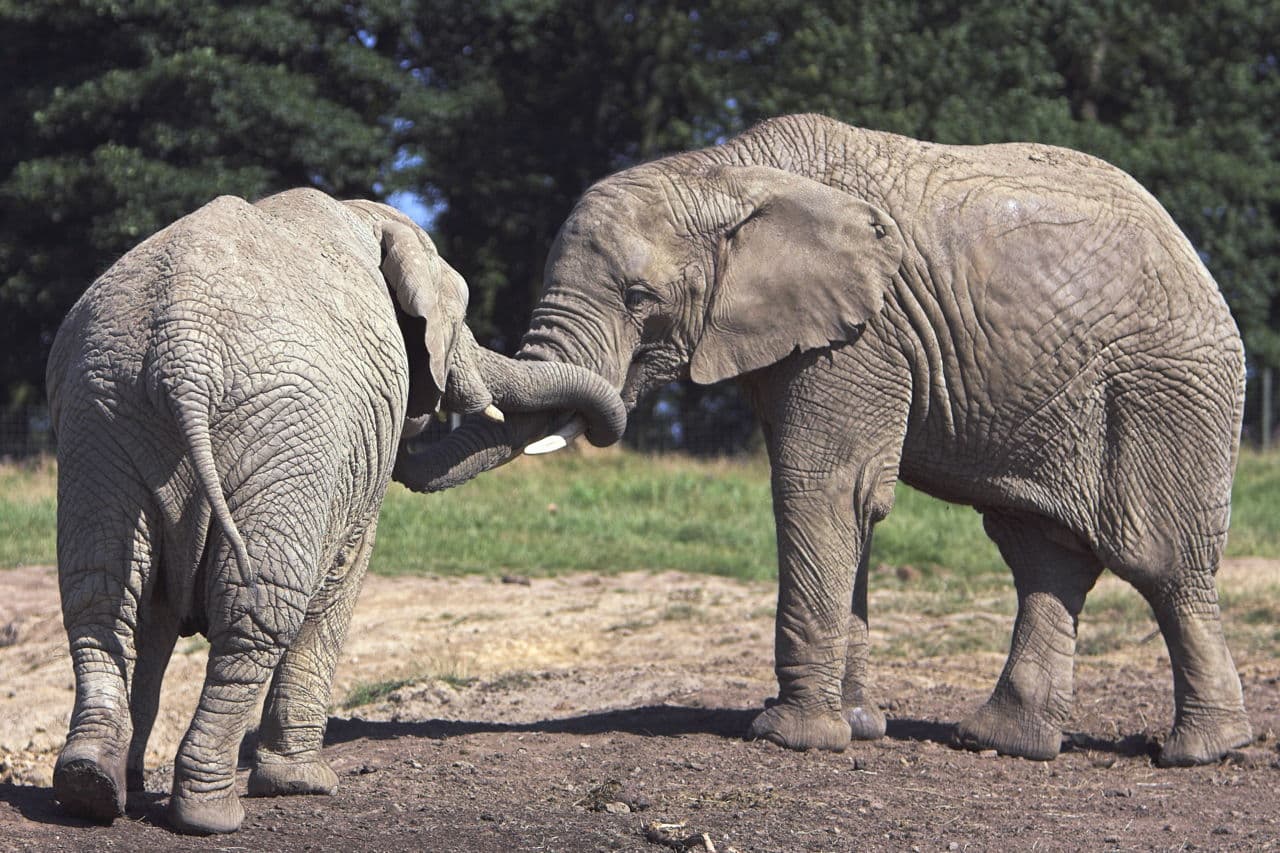 Elephants are so large and strong that they do not have any natural predators. The only thing these creatures need to worry about is human poachers. 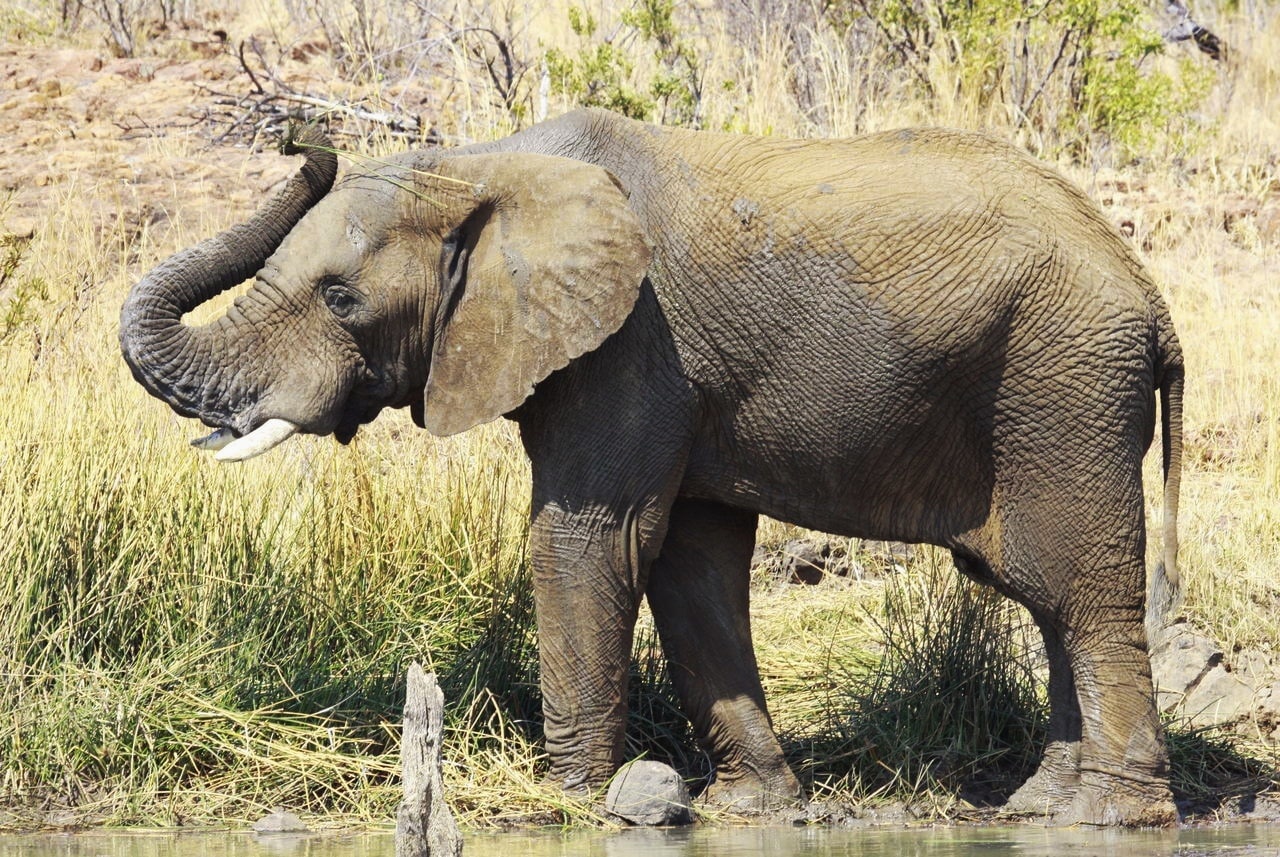 One reason for poaching elephants is to remove their tusks, which are made of ivory. The African Bush elephant has short ivory tusks, but that doesn’t stop poachers from killing them and removing their tusks to sell on the Asian black market.

In 1989 Africa outlawed poaching elephants. That didn’t stop everyone though. There are still illegal poachers killing at least 100 elephants daily. Why so many? Because the price of ivory has increased drastically over the last few years. 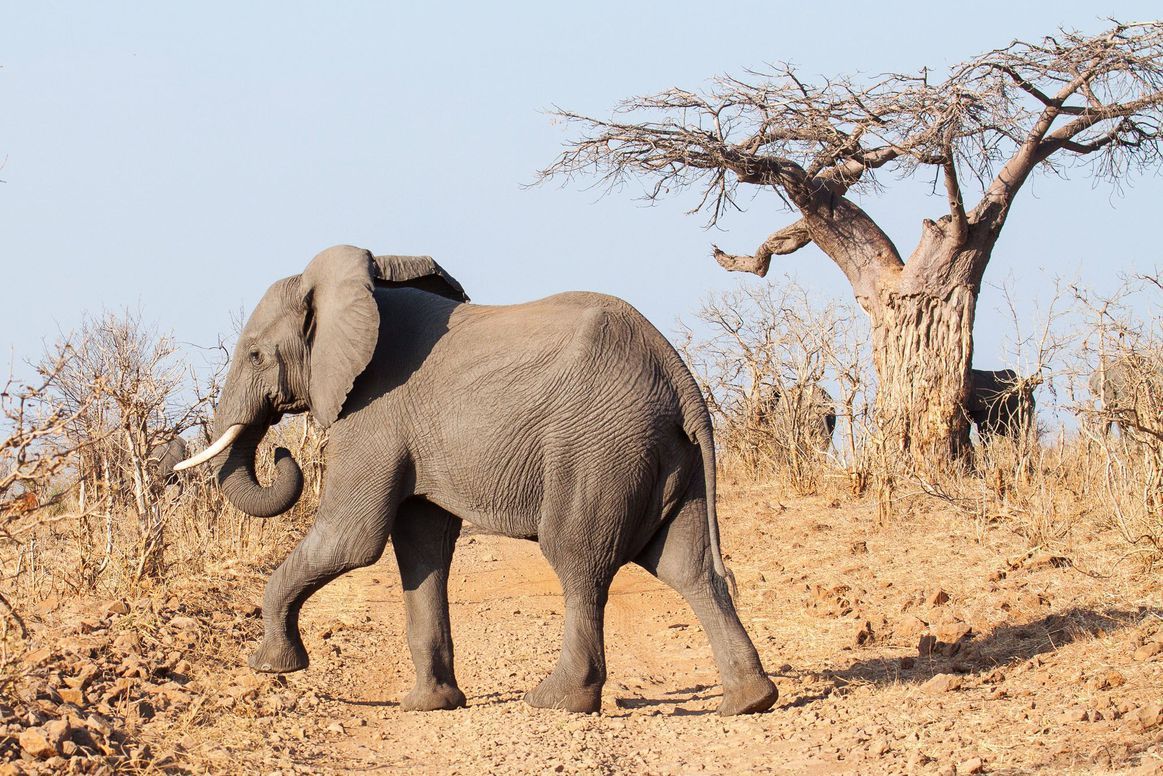 Many tourists who come to Africa enjoy going on a safari with a tour guide. They are packed into a 4X4 and driven around the African lands to see exotic animals in their natural habitat. 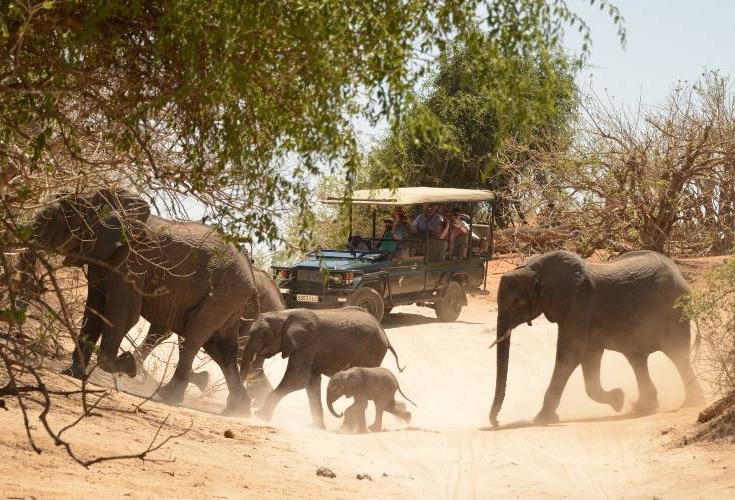 In January 2018, a guide and his tourists went out on a routine safari. Sadly, this routine safari would take a dangerous turn when they came across an elephant and her baby.

Hiding in the Bushes 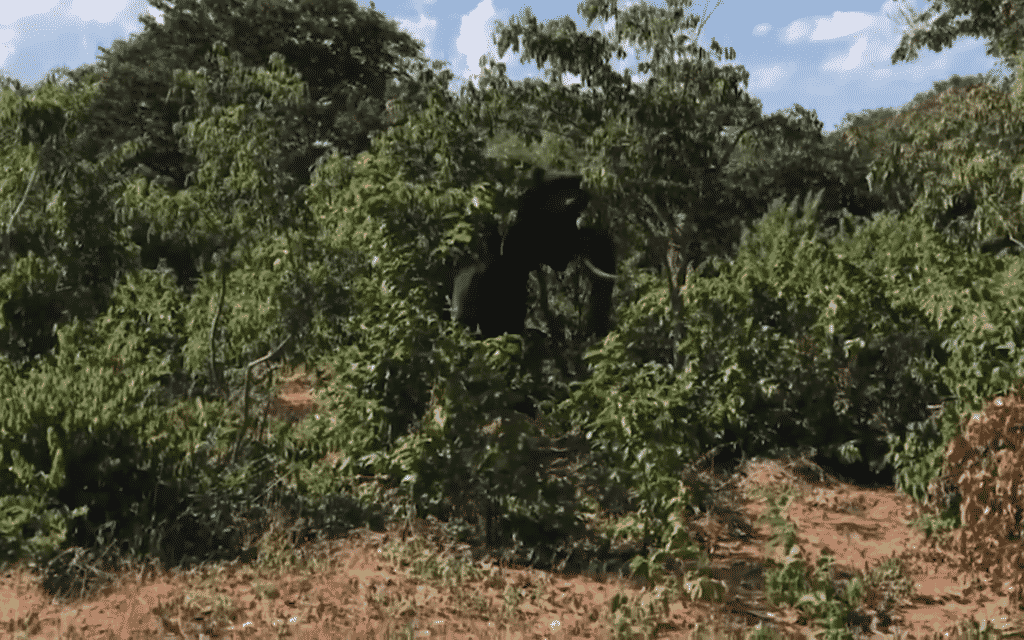 At first, the tourists noticed flashes of gray in the bushes near their jeep. It could only be one thing. Elephants! 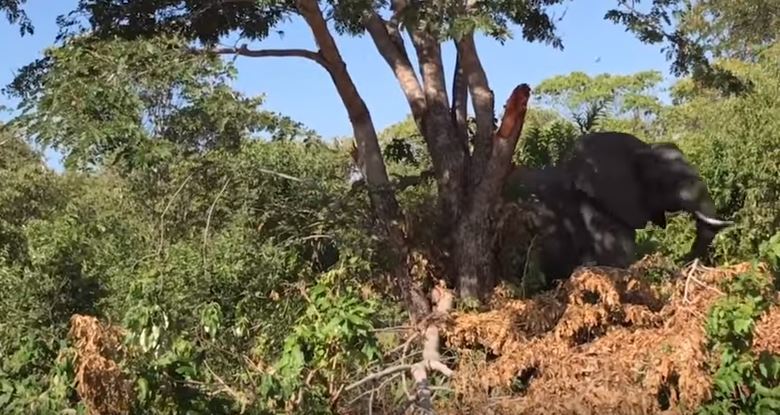 The elephant revealed itself to the tourists as they snapped pictures. However, elephants can be nervous and wary of people who intrude on their territory. 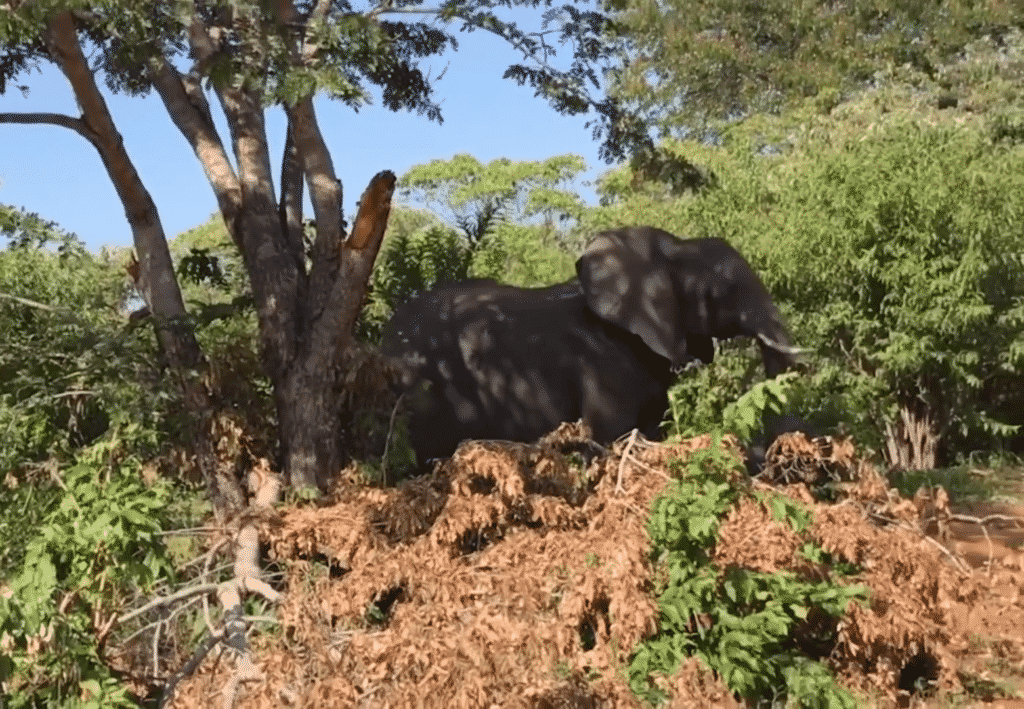 The spotted elephant decides to trumpet loudly and let the tourists know it’s there. There are a couple of reasons the elephant would do this. One is because it’s excited to see people. The other is because it is angry that their land is being intruded. 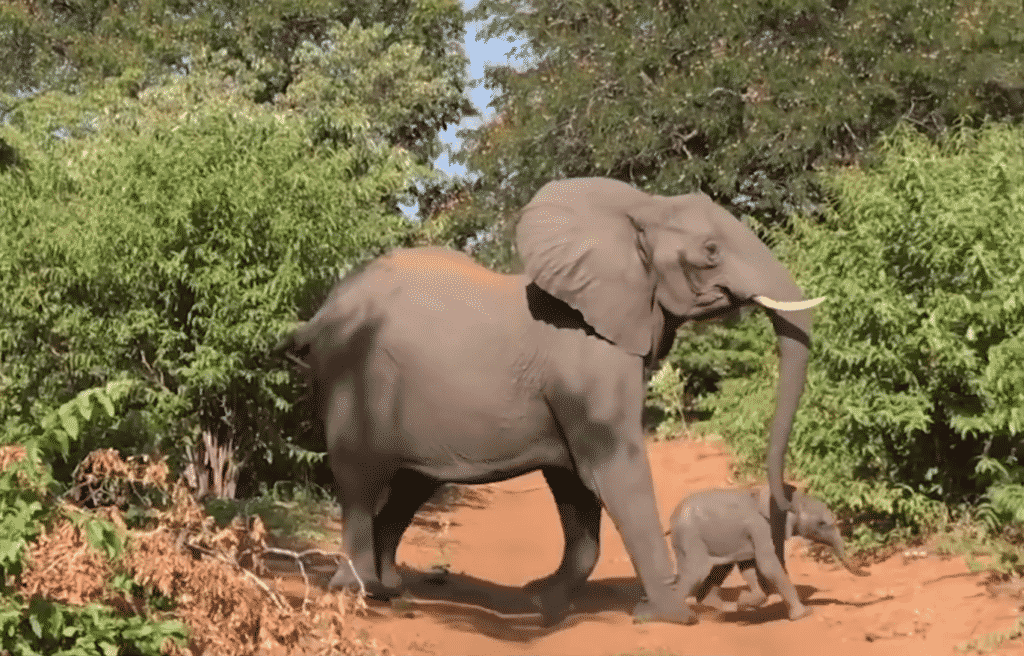 Just a few moments later, the tourists see a baby elephant come out from the bushes and join its mother. The mother kept trumpeting warning the tourists. 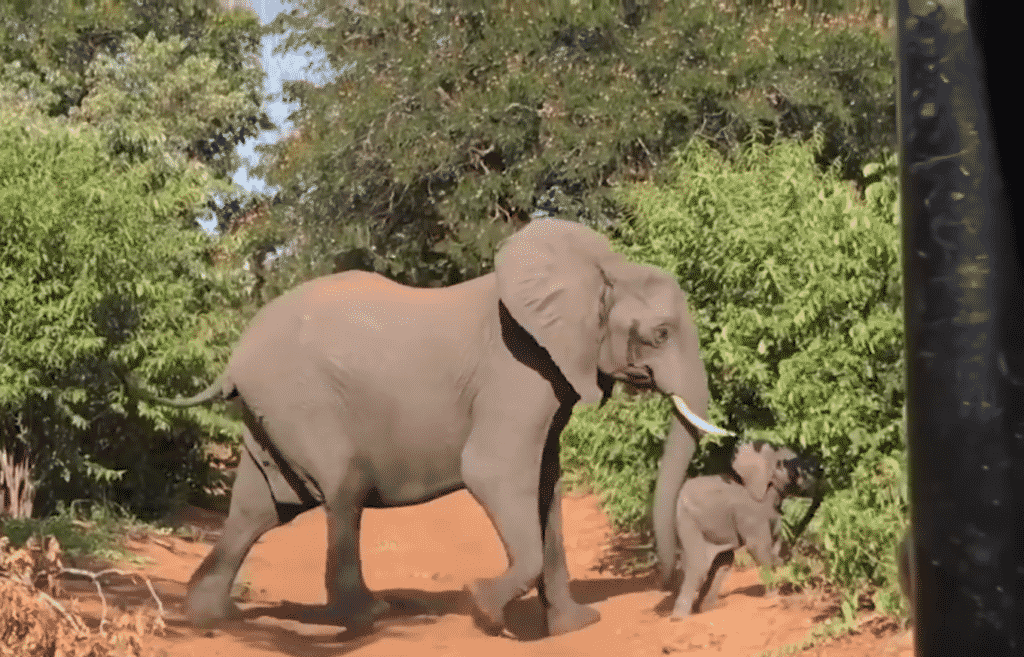 The mother elephant pushed her baby back into the bushes, but she didn’t follow. Instead, she kept making her loud noises and standing in front of the vehicle full of tourists. 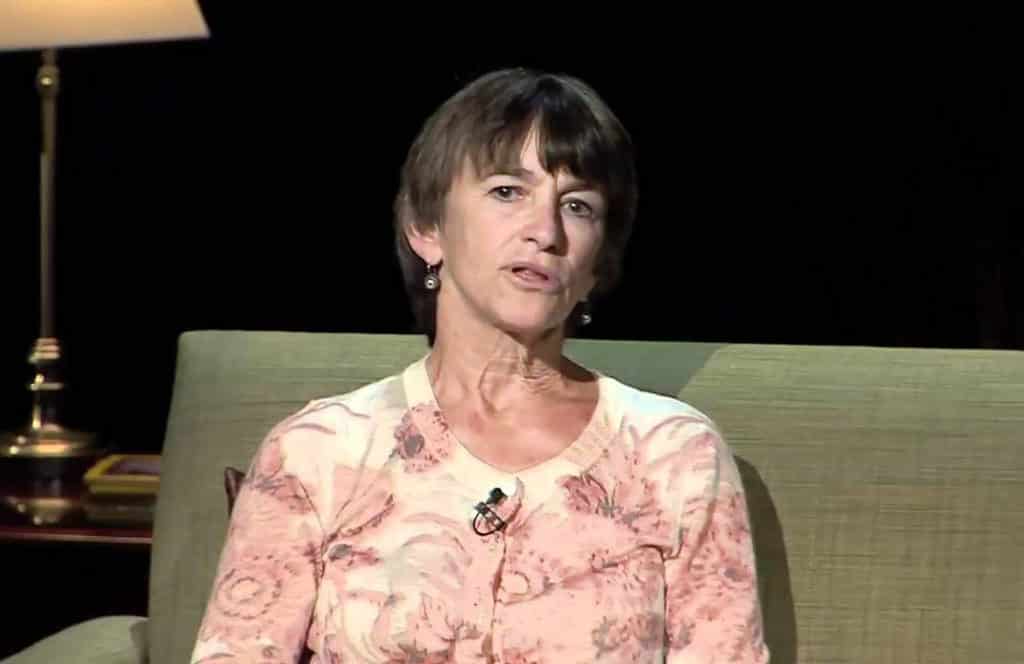 According to Joyce Poole, the Scientific Director of Elephant Voices, the mother was warning the tourists not to come closer. She may have also been the matriarch of her herd. 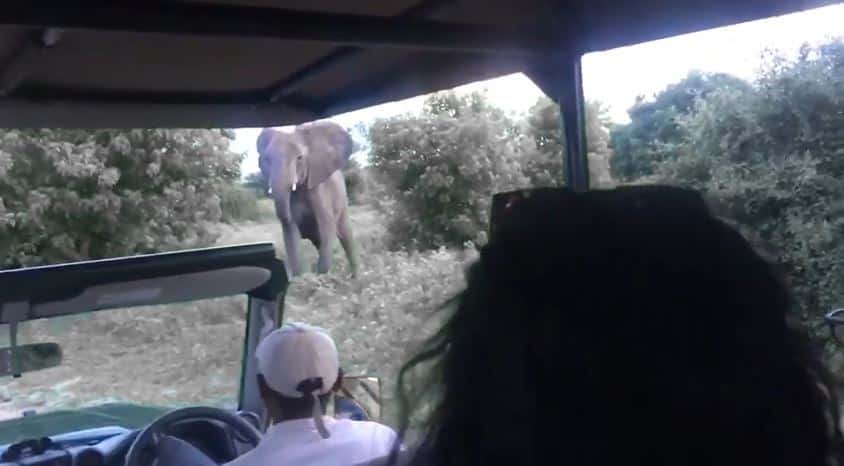 Once the guide realized they were in a dangerous situation, he drove away from the scene slowly. The elephant wasn’t satisfied enough, though. She started to walk towards the vehicle. 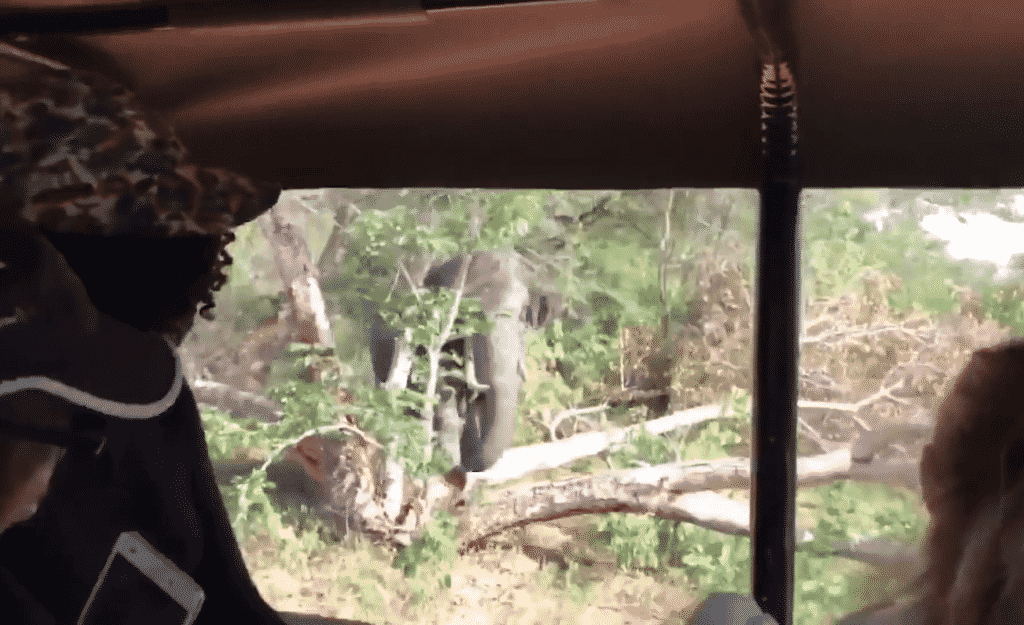 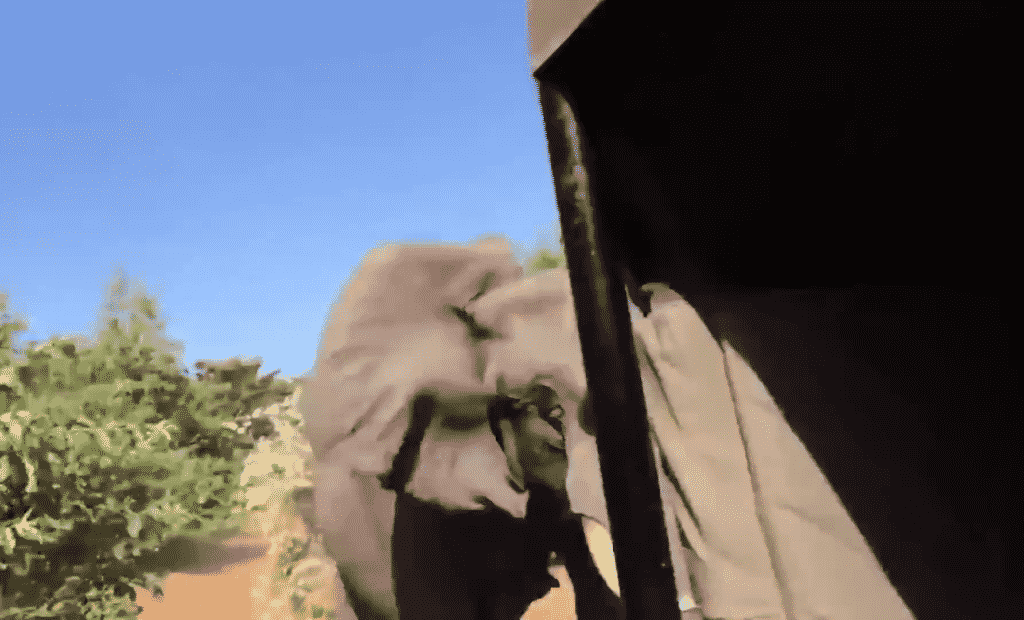 Just a few seconds later, the mama elephant charged towards the vehicle. It was in this moment that the tourists realized how much danger they were really in and started to scream. She picked up speed as she got closer to the vehicle.

Too Close for Comfort 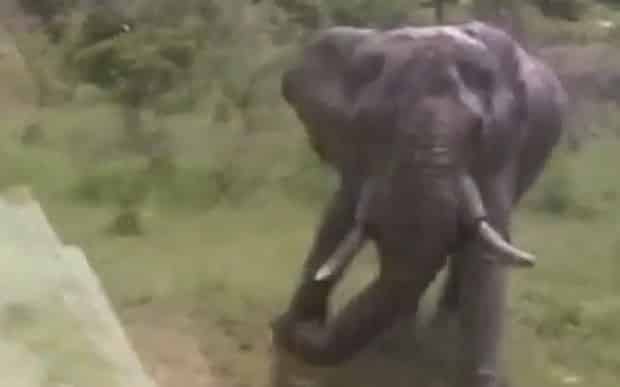 The elephant got closer and closer to the vehicle and started to trumpet again. The tourists held on to each other tight and braced themselves for what happened next. 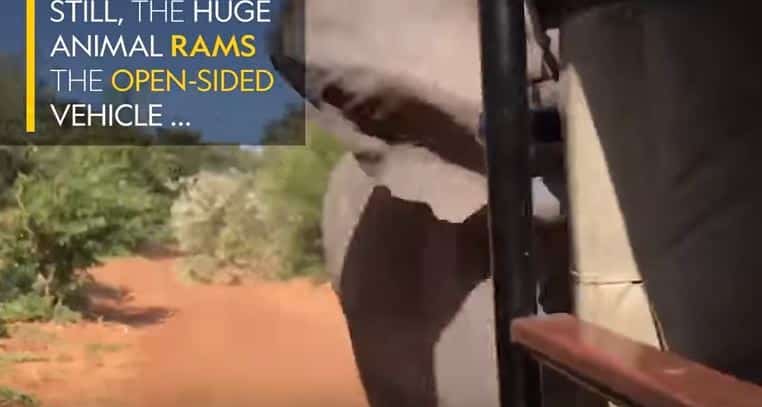 The elephant made contact with the vehicle with a lot of force. She made the vehicle lurch forward in an attempt to let the tourists know that they are not welcome in her territory, especially near her baby. 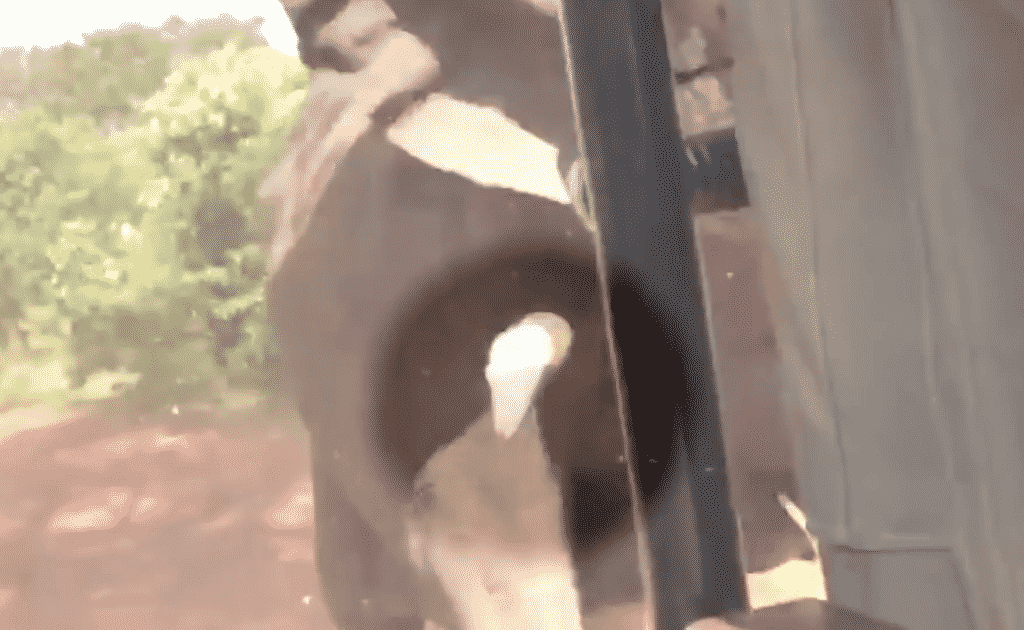 The elephant’s tusk broke off from the impact of hitting the vehicle. While this doesn’t seem like a big deal, it can cause a lot of issues for elephants. 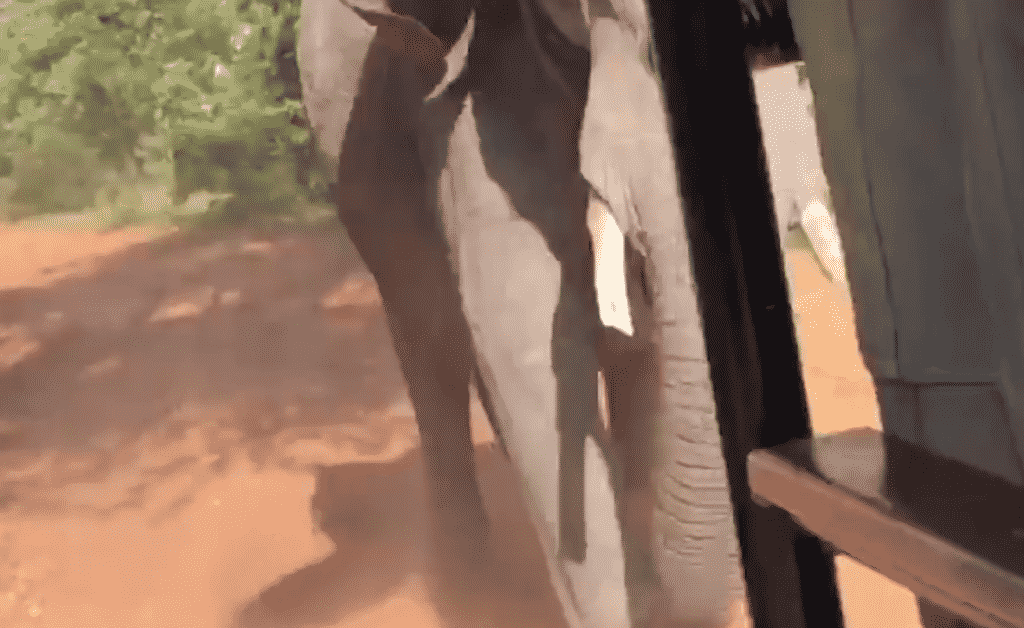 The broken tusk would pose many health risks for the elephant down the line. If one of the nerves in the tusk was to get infected, it could be life threatening to the elephant. Luckily for this elephant, there was a clean break so she wouldn’t be at risk. 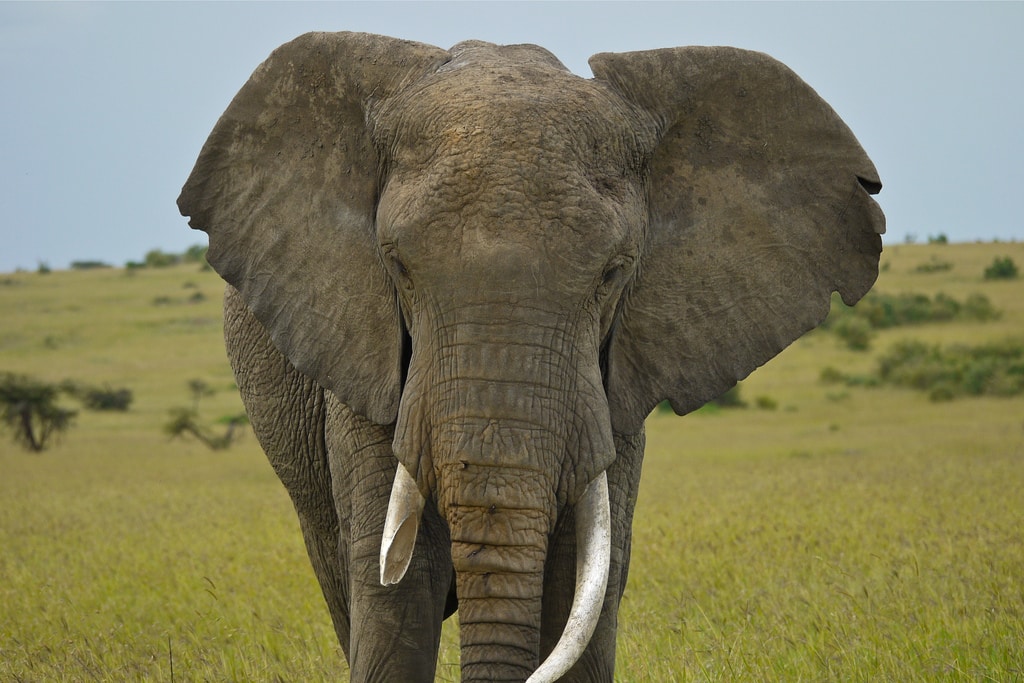 Many elephants use their tusks to defend themselves from other creatures and to help them eat and find food. So, this elephant will have to learn how to adapt with one short tusk.

Not Worth The Risk 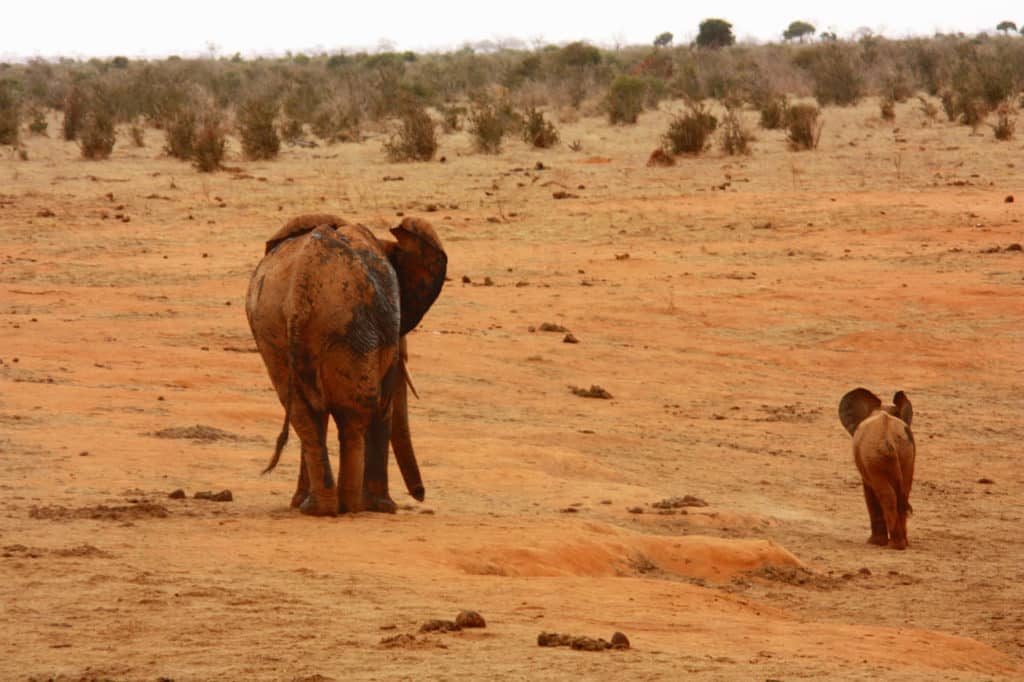 While this seems like a simple problem that doesn’t cause much damage, when it comes to the elephant population it means a lot. With the population still working its way up to before the poaching in the 19th century, every elephant needs to be in good and capable shape. It’s times like these that we need parks like Chobe to help nurture animal populations back to healthy numbers.