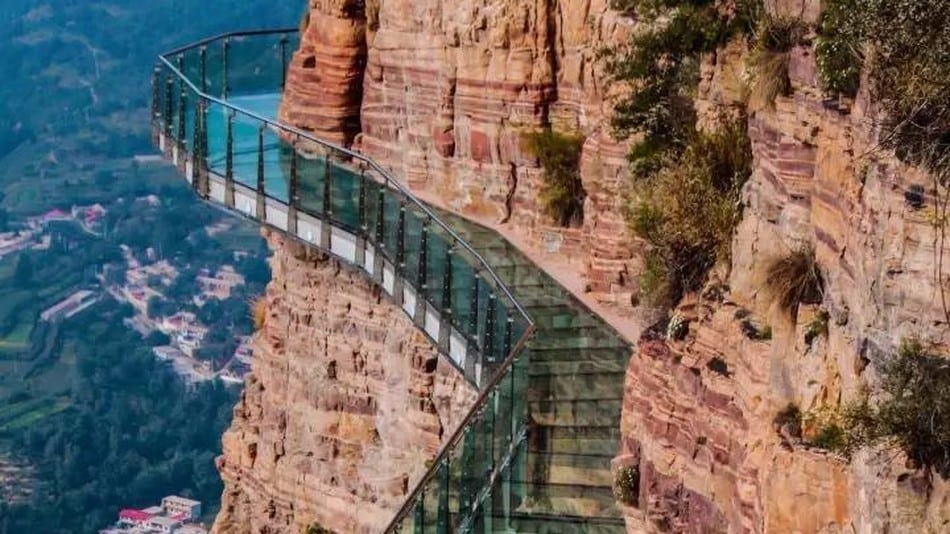 Many people have a fear of heights. It’s a reasonable fear. However, for this Chinese tour guide, he was about to conquer his fear when he walked across a glass bridge. He was dealing with his fear, until something terrible happened. 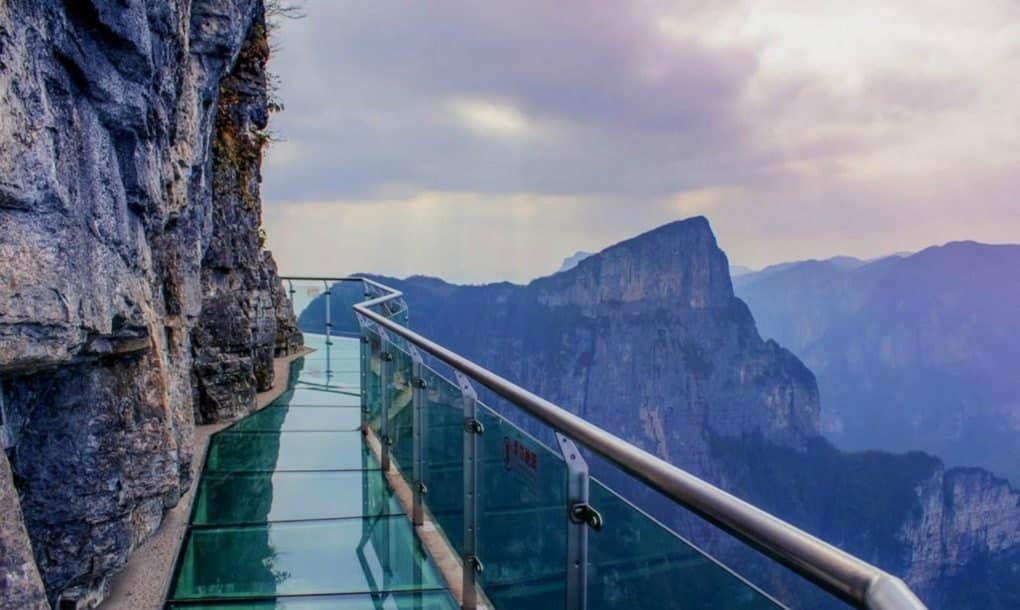 China has a total of 60 glass bridges around the country. It creates a thrilling experience while offering a gorgeous view. 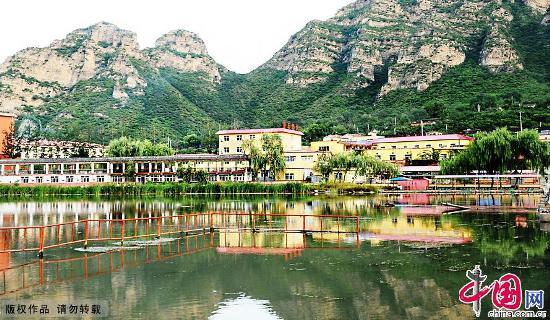 A Chinese tour guide had a day planned in Hebei, China for his tour group. He knew that he was taking them on a glass bridge, but wasn’t very happy about it. He had a fear of heights. However, he didn’t want to let his group down. 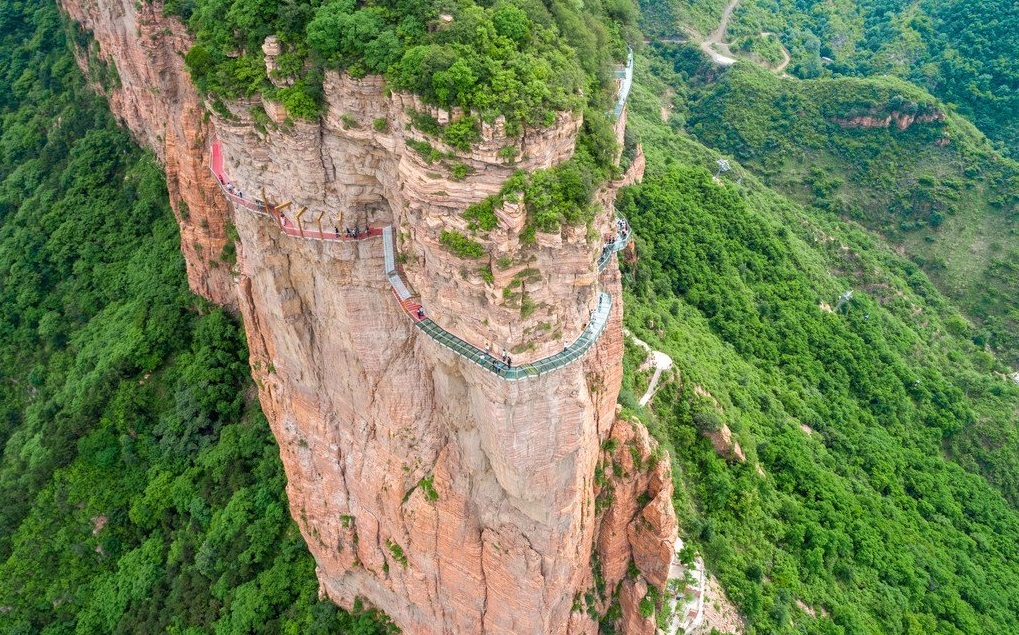 Taihang Mountain is home to the glass bridge that is raised 3,871 feet above sea level. It’s a gorgeous view, but also a terrifying experience if you don’t like heights. 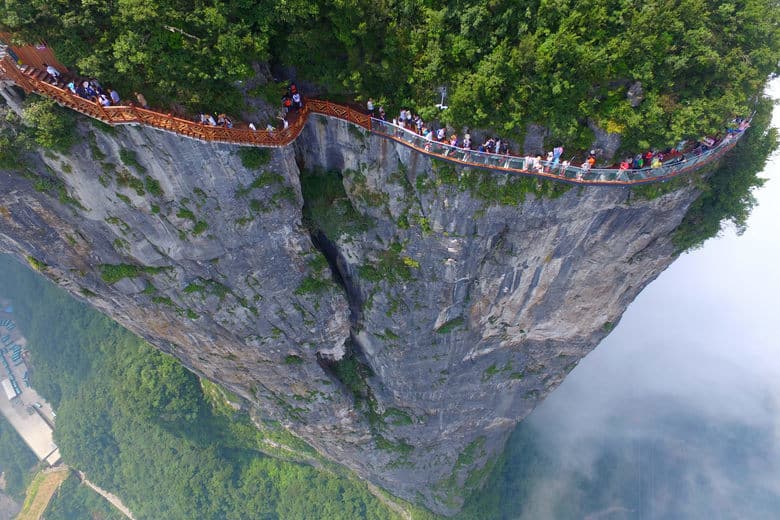 The glass bridge opened in 2017. It was popular among travelers because it gave them an unobstructed view of the land and they could take in the beautiful scenery. 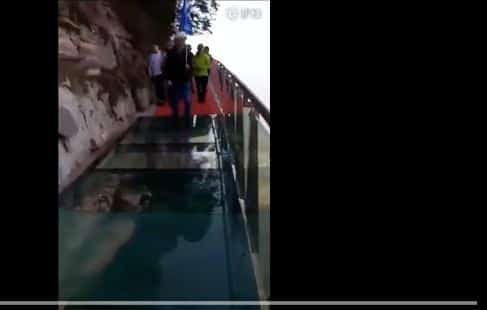 The tour guide, while afraid of heights, didn’t expect anything out of the ordinary to happen the day they visited the glass bridge. He had no idea that by the end of the day he would have his life flash before him.

The guide led the group onto the bridge to show them that it was completely safe. He stepped onto the glass and took a few steps. Then something horrendous happened. 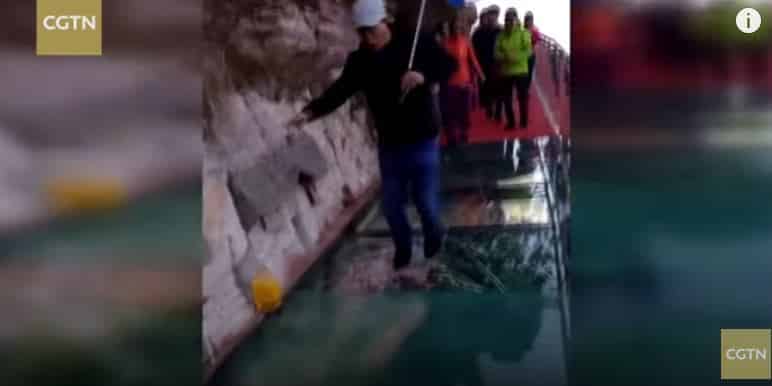 With one more step, the tour guide heard the crack of the glass. When he looked down he saw tiny cracks spreading in the glass. He froze in fear. 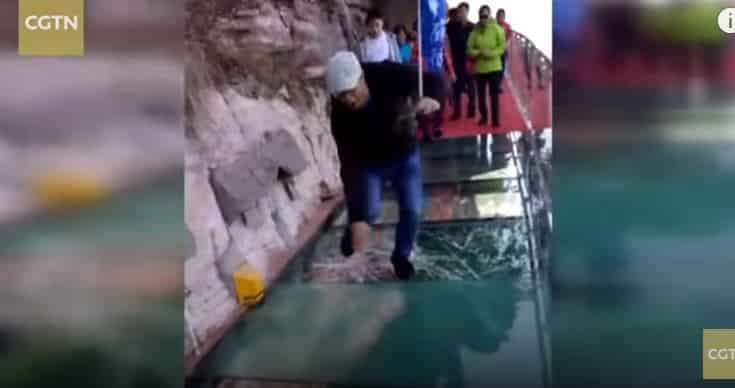 The cracks continued to spread. The tour guide had just seconds to react and save himself. So, he jumped to the next slab of glass. 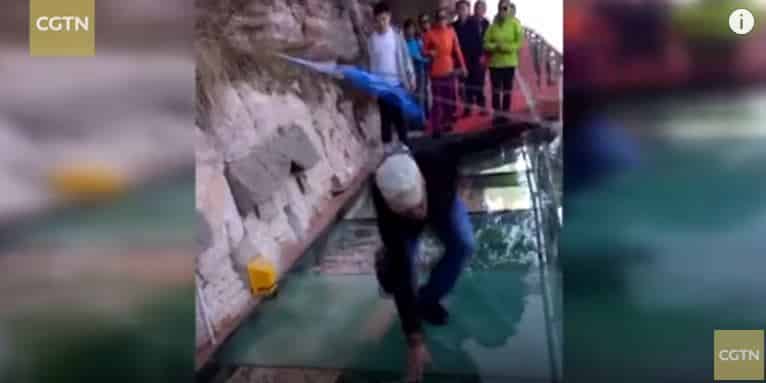 The tour guide fell as fear took over his body. As he hit the ground he knew that his life was over. The moment he fell he knew the glass could give out. 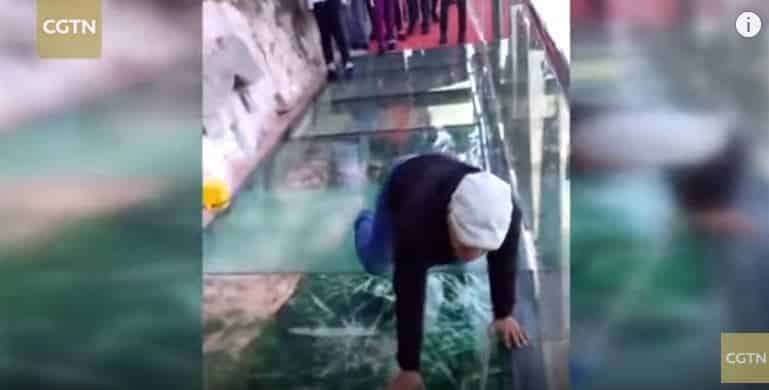 When the man hit the ground, the glass didn’t shatter. In fact, nothing happened at all. Confused and grateful, the tour guide wasn’t sure what to do. 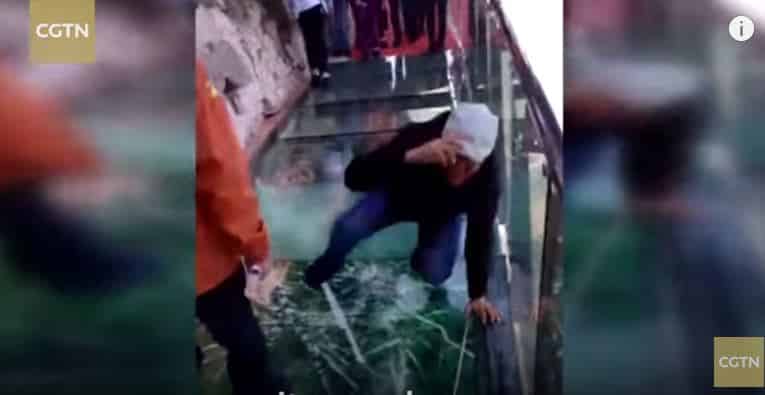 It turns out the cracking glass was a publicity stunt. The company that owned the bridge created projections and sound effects to make it look like the bridge was breaking.

Sometimes you just have to laugh with the overwhelming emotions. The tour guide laughed off the scare but was visibly shaken up. 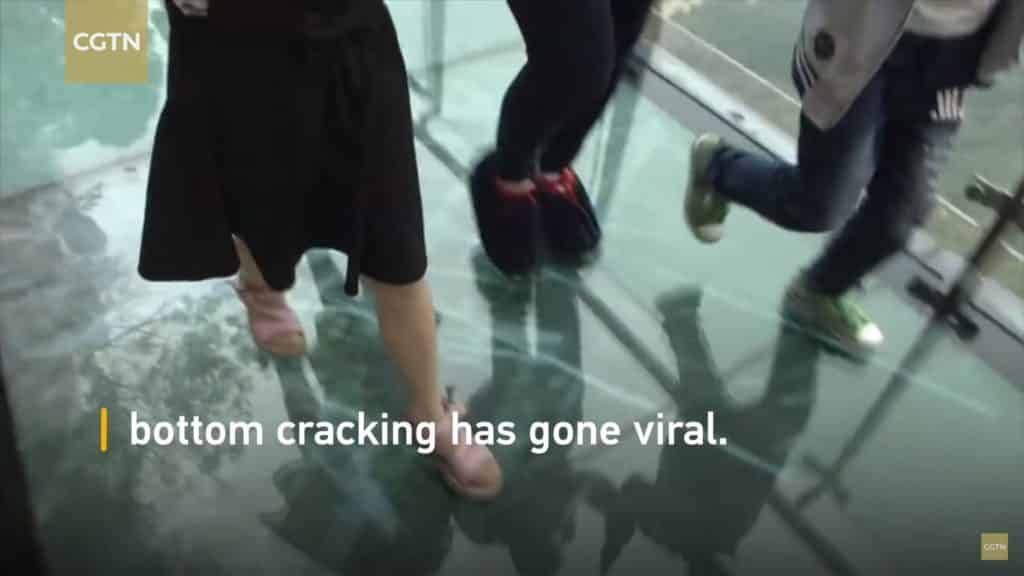 One of the tourists caught the whole ordeal on camera and posted it online. The video went viral. Some viewers thought the stunt was brilliant while others thought it was just plain mean and unprofessional. 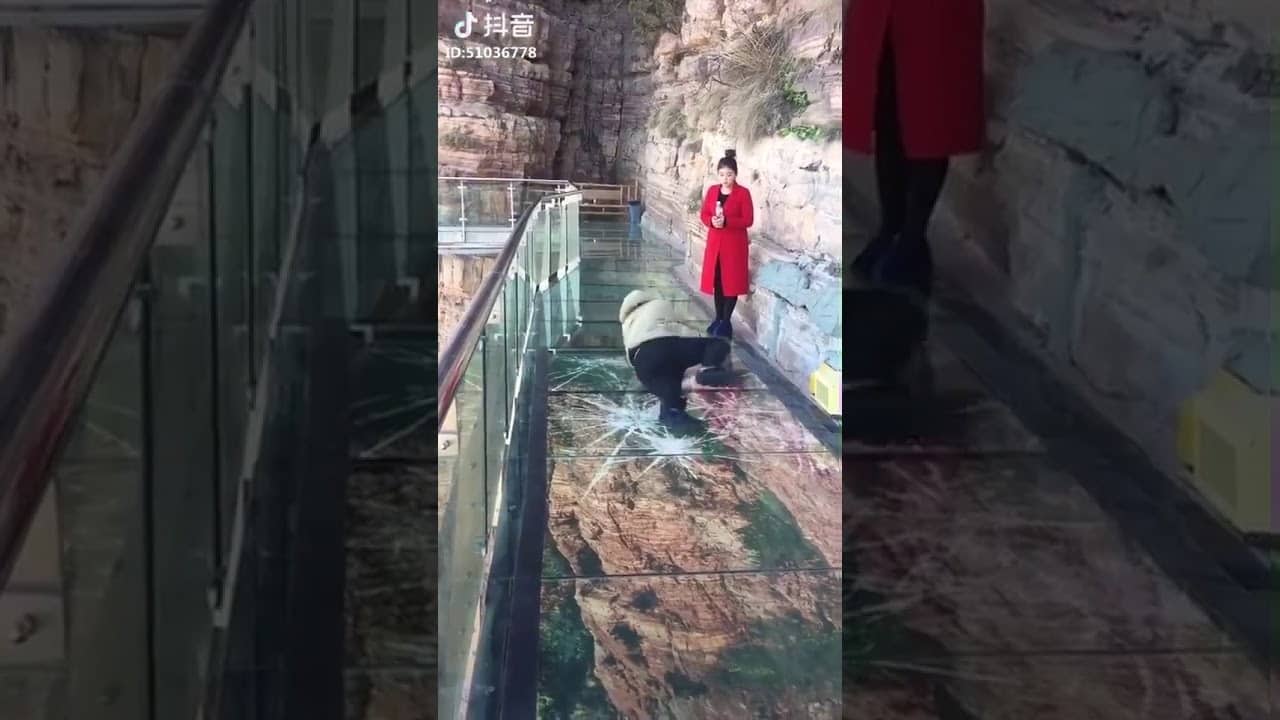 The company didn’t stop their prank of the breaking glass on the bridge. They scared more and more tourists every day. 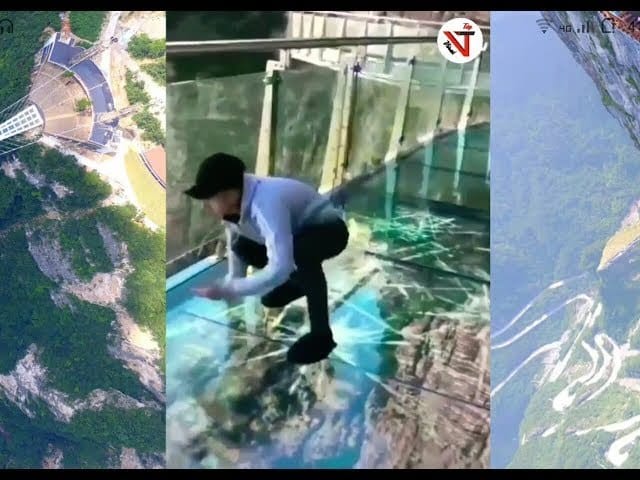 With the mixed reactions, the East Taighang district issued an apology. They claimed they wanted make something “provocative” and it only effected a small part of the bridge. 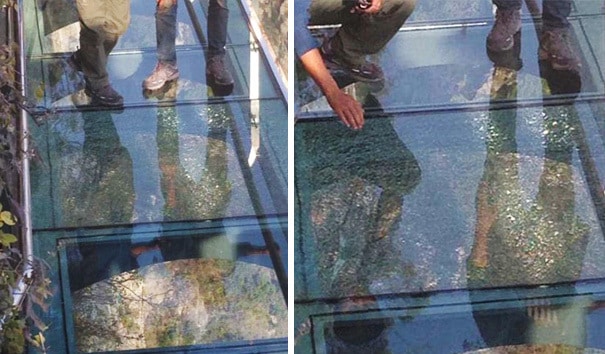 The trick behind the prank was revealed to the world. Fragments of broken glass were put in one of the layers on the bridge. So, when people walked on the area, it looked like the glass was breaking. They also timed audio of glass breaking with people stepping on the glass. 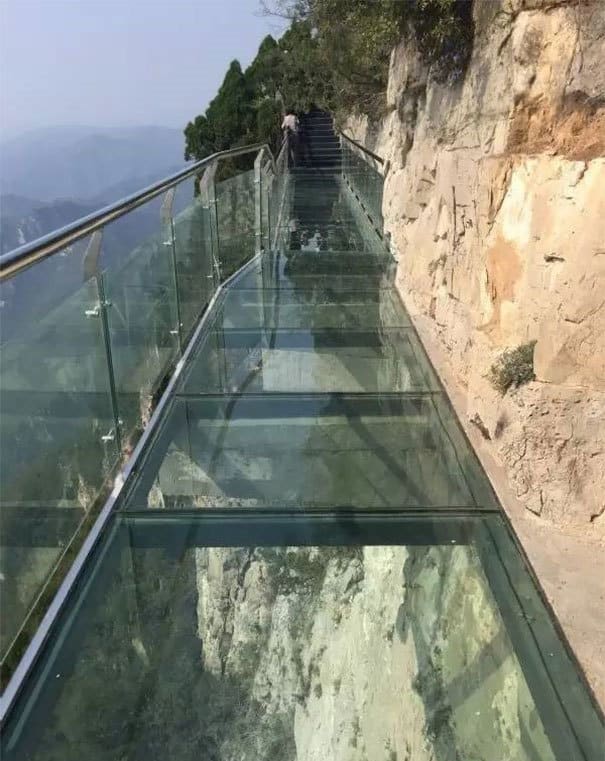 While the company issued an apology, they are not going to change anything about the bridge. They want to keep scaring people and give them the thrill of a lifetime.

The Problem with Glass Bridges

The Taihang Walkway was just a prank, but there have been instances of glass bridges actually cracking. In 2015 the Yuntai glass bridge splintered and sent tourists in a panic. It was later closed. 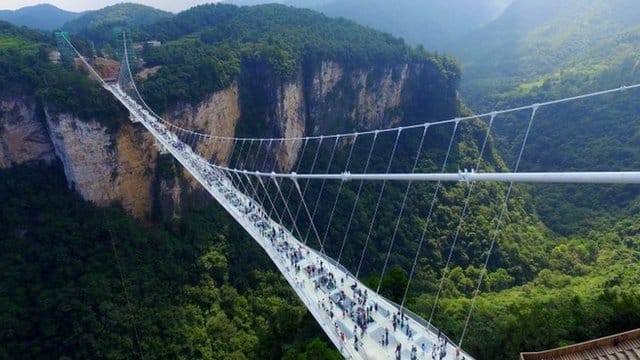 The Chinese government promises that these glass bridges are safe and that experienced and educated engineers worked on them. There are multiple safety tests before a bridge opens. The Zhangjiajie Bridge even had SUVs drive over it. Would you risk walking over one of these glass bridges?