This Puppy Was Abandoned At An Airport, But The Reason Why Is Even More Heartbreaking

15. The Sad Truth about Pets

One of the saddest facts when it comes to pets in the United States is how many are abandoned on a daily basis. Shelters across the country are filled to the brim with puppies, senior dogs and cats of all ages, due to their owners leaving them for a new job, home or simply out of a lack of responsibility.

One such case of abandonment happened in a Las Vegas airport, when one family stumbled upon a terrified puppy that was left in the bathroom stall. How could anyone leave a puppy in an airport? The reason may shock you…

The unsuspecting traveler had no idea when he entered the bathroom, he would find a scared and alone three-month old chihuahua puppy stuffed beside the toilet. Talk about the surprise of a lifetime. Scared, confused and seeking love, the little puppy bonded to the traveler almost instantly.

12. How Could Someone Do This?

The traveler was furious. How could anyone just discard a puppy with no care in the world? The precious pup had a hastily scribbled note next to him. What could it possibly say to justify such abandonment?

11. Things Aren’t Always What They Seem

The note was hard to read, obviously written by someone in a hurry. What was written; however, was a sad tale of abuse and the desire for a better life for the little one. You won’t believe what it said!

Written on a creased piece of crinkled paper was a plea to find a better home for the puppy whose name was Chewy. The woman detailed her escape from an abusive relationship and her wish for a better life for the small pooch. The abandonment did not come from a place of viciousness, but one of love.

The heartbreaking note expanded on a history of violence from the previous owner, Cheryl’s ex-boyfriend. Escaping the relationship, Cheryl could not afford to fly poor little Chewy with her. (We told you this story was heartbreaking).

Desperate and unable to bring the poor puppy on the flight, the owner made the ultimate sacrifice to leave him behind with the hope that someone good would find him. And thankfully, someone did. 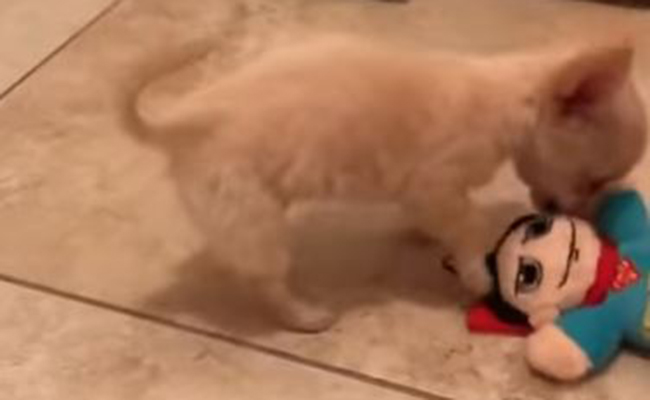 The letter went on to reveal that the horrible ex-boyfriend kicked poor little Chewy in the head and recommended he see a vet for a small knot on his head. How could anyone kick a small puppy? They definitely were a monster of a person for sure.

When the news broke the story of little Chewy, his plight went viral. Thousands of people called in with the hopes of taking care of Chewy as donations flooded the shelter where Chewy was taken.

With a clean bill of health from the shelter, Chewy was made available for adoption on the Connor and Millie’s Dog Rescue Facebook page. Chewy’s first status update was to make an announcement. Believe us when we say, it’s absolutely adorable!

4. Too Cute for Words

Using quite a few emoji’s and misspelled words, Chewy let his adoring fans know that he was doing great after being placed in doggy hospice. He also had one more important message for those looking to adopt him.

3. A Message from Chewy

Chewy’s full message was as follows:

“I LOVE YOU ALL yeah ! I’m being told I’m super duper loved too from all over the con tree. My pack is buried in paper ( kinda comes in handy when I needs to potts funny too they make funny noises when I do that) since there is just one of me my pack can’t accept any more Apple cations for me.”

The shelter revealed that there were so many applications for Chewy, that it would take awhile to sift through them all and hopefully find a match. In the meantime, they were happy to collect puppy treats and toys for the little fur ball of joy.

While Chewy is still waiting to be adopted, his life is filled with love and happiness. Despite his story beginning with abandonment, it was the selfless act of his loving owner that placed him in a much better life. We’re rooting for you Chewy!