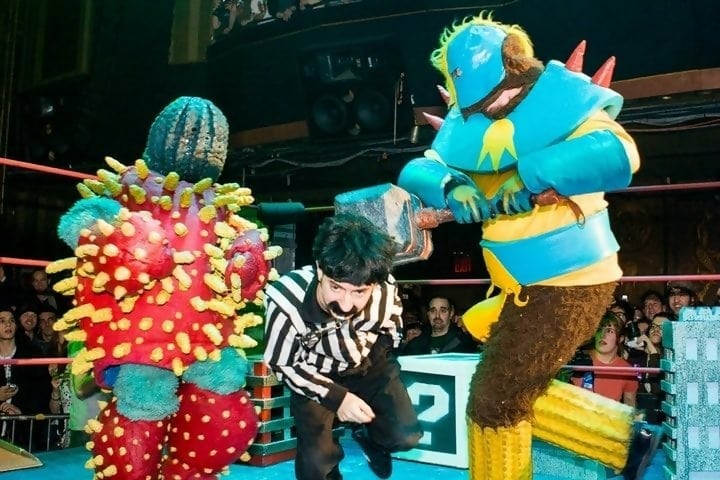 We’ve all heard of the typical sports such as football, soccer, tennis, and so on and so forth. They’re televised nationally and played in the world Olympics. However, there are some sports out there that are so strange you have to be “in the know” to enjoy them. These are some of the strangest sports that exist with huge fan followings. Maybe you’ll want to give one a try! 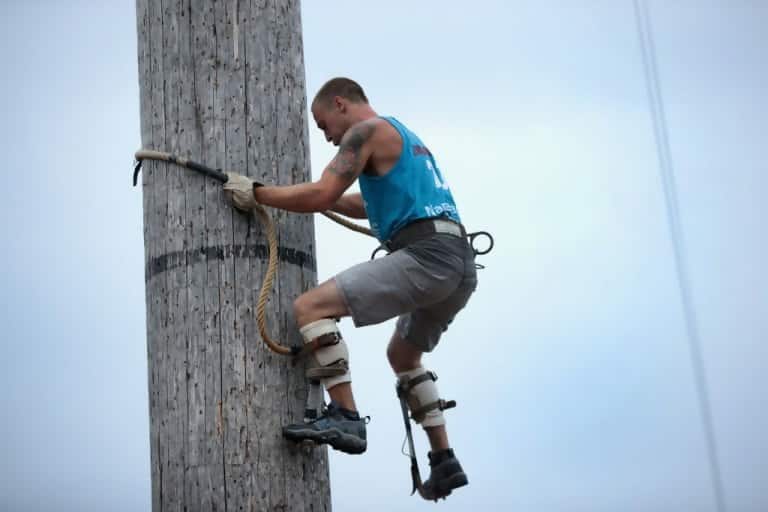 Being a lumberjack is more than just cutting wood with an ax nowadays. There is a World Championship for lumberjacks everywhere! The event takes place in Wisconsin and is open to both men and women. Activities include climbing, sawing, chopping wood, and more! 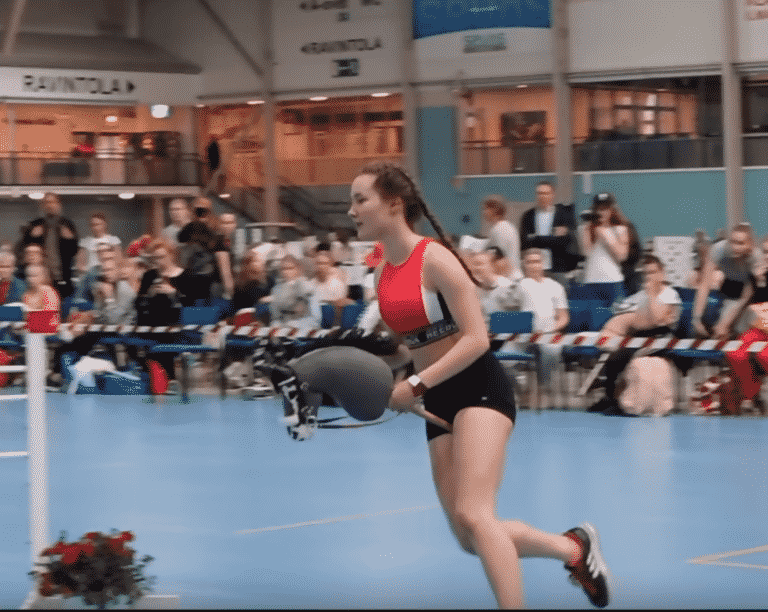 Remember playing with horse heads on a stick as a child? Well, it’s a certified sport now! Hobbyhosring began in Finland and involves running around a gym riding these “horses” in competition. 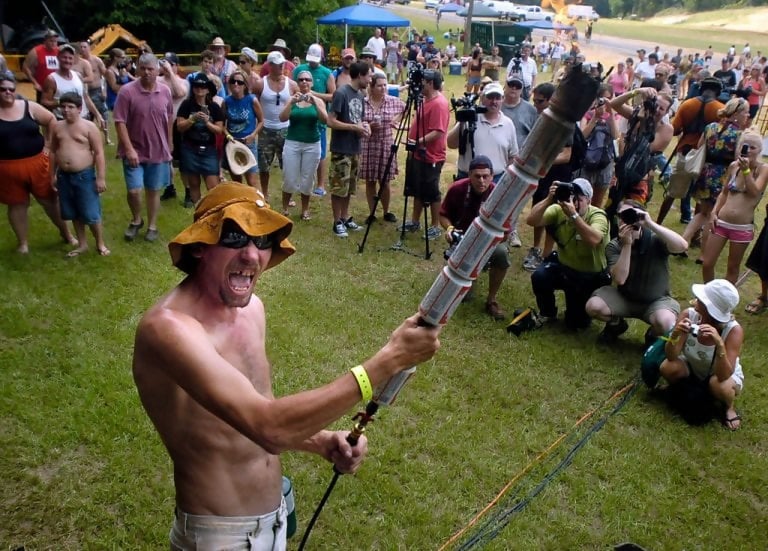 “Redneck” can be considered an offensive word to people in the South or Midwest. However, some of these people fully embrace the term and participate in the Summer Redneck Games in East Dublin, Georgia. Events include watermelon seed spitting, ring toss with toilet seats, and belly flopping in a puddle of mud. 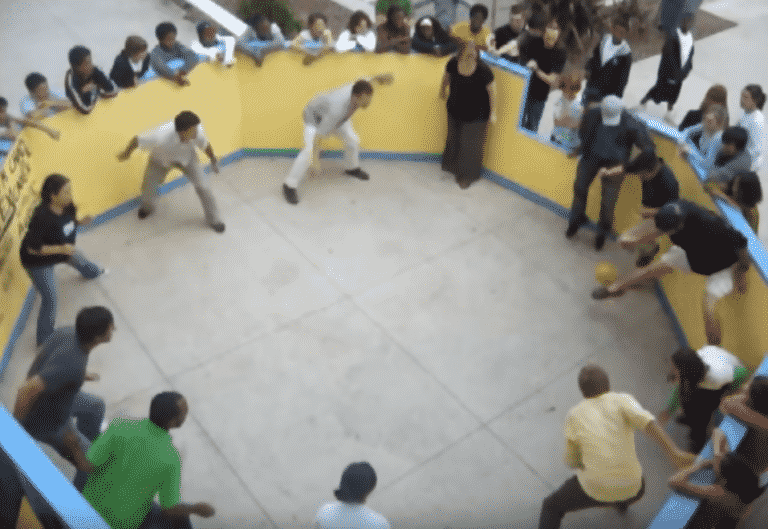 No, we aren’t talking about the pop singer here. Gaga is a sport that showed up out of nowhere and has taken the strange sports world by storm. It consists of an octagonal court with a wall, wooden benches, and tossing around a tennis ball trying to hit other players’ knees. 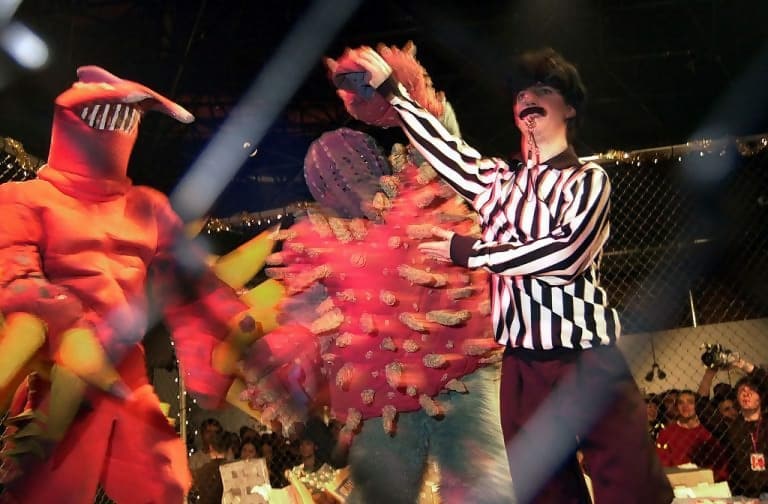 Wrestling is a popular sport and has a huge following. Well, Kaiju Big Battel is a pseudo wrestling sport that involves participants dressing up as monsters and wrestling each other in a ring. It’s extremely entertaining! 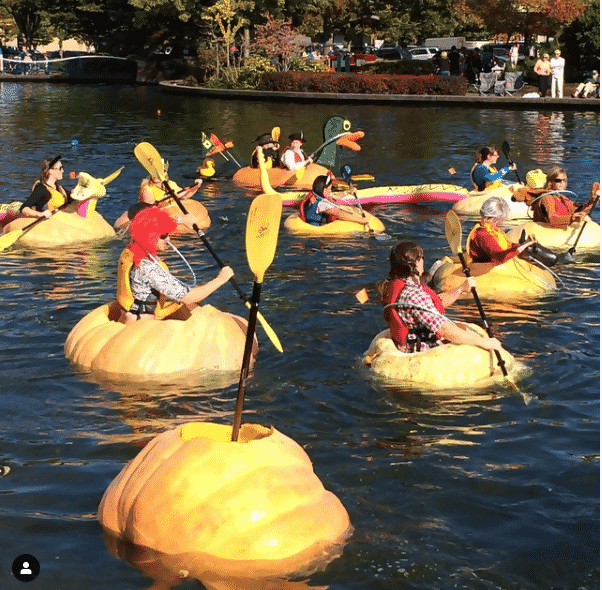 Regatta often refers to a boat or yacht race. However, the West Coast Giant Pumpkin Regatta involves paddling down a river in, you guessed it, a giant pumpkin! The event takes place near Portland, Oregon and stays true to the town’s slogan, “Keep It Weird.” 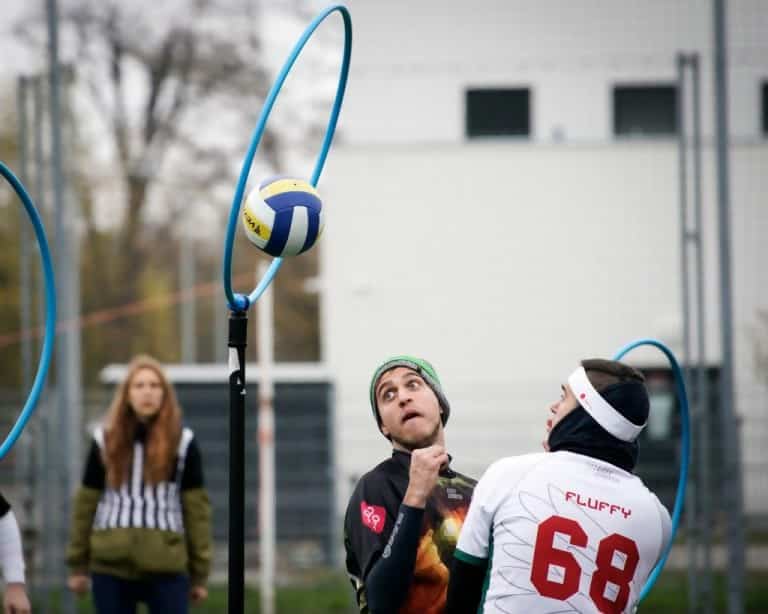 Quidditch has become a real and competitive sport after J.K. Rowling’s Harry Potter series gained international attention and love. The sport is mostly played by college students who want to take their love of Harry Potter to a whole new level. There is even an International Quidditch World Cup! 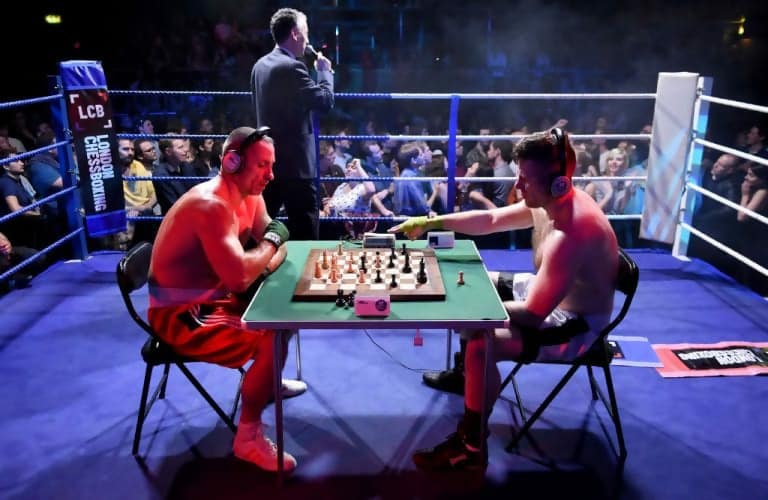 Started in Berlin, Germany in 2003, Chess Boxing takes two games, chess and boxing, and combines them into one strange sport. There are 11 three-minute rounds where the players play chess and box against each other. 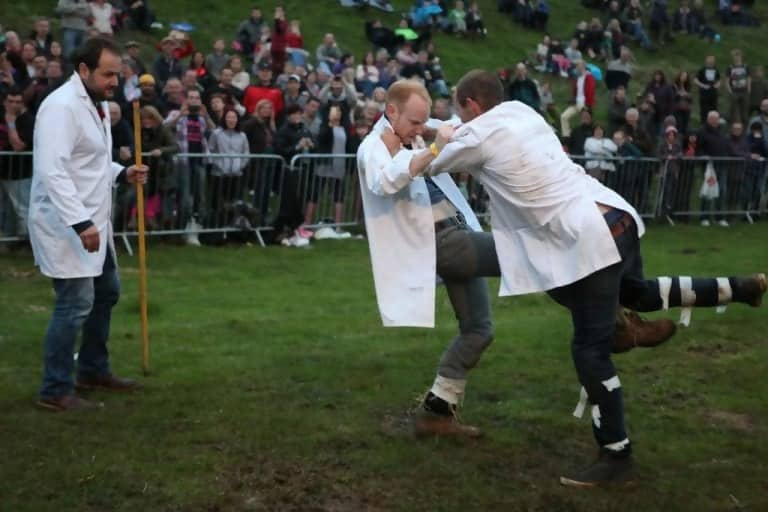 This strange sport is pretty self-explaining and it sounds epically painful. Players must hold each other by the collar and try their best to kick each other’s shins. Once an opponent has had enough, they shout “sufficient,” which means they have lost the game. 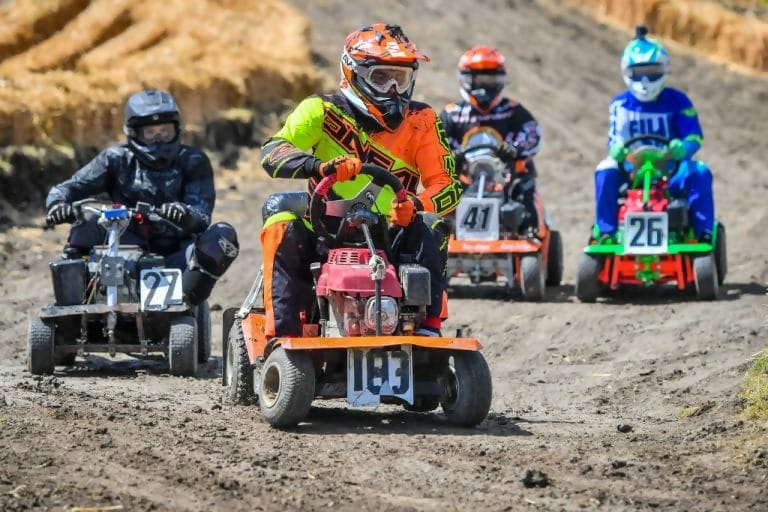 This strange sport is pretty intense, despite it sounding comical. Started in the UK, lawn mower racing has really taken off and even became a video game, Lawnmower Racing Mania 2007, for Xbox. 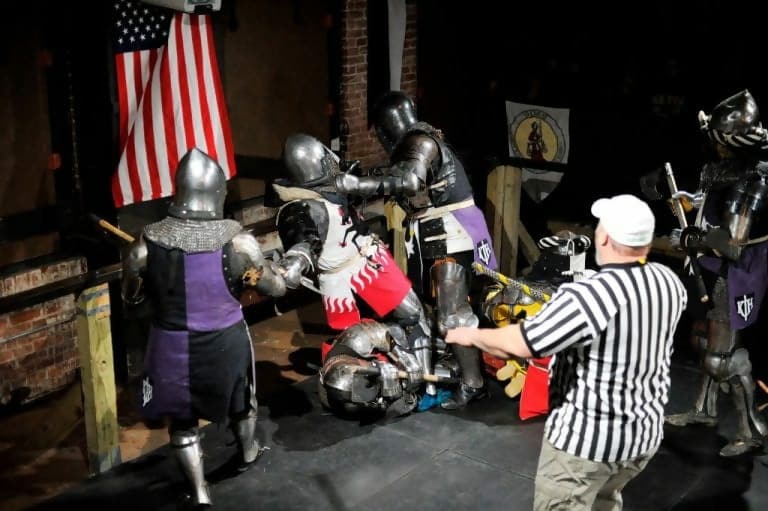 Step back in time with this strange sport. Participants dress up in armor from the Renaissance and compete in a duking game. Talk about a knight in shining armor. 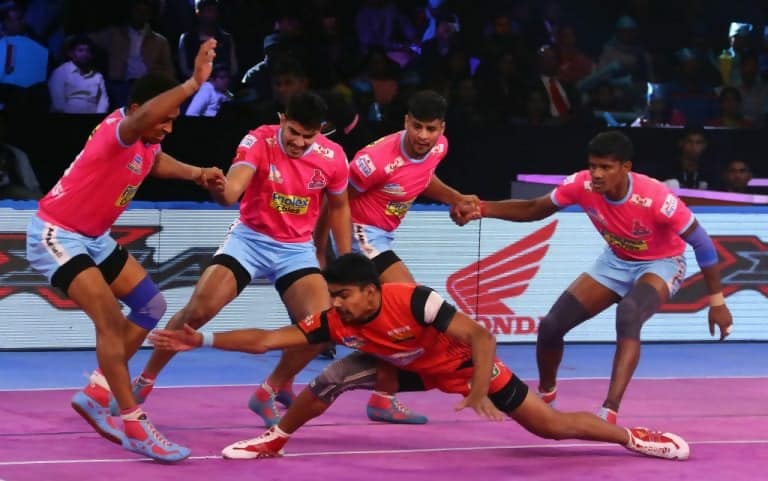 Think about playing tag as a child and then add some really intense competition to it. In Kabaddi, whoever is “it” has to avoid being tackled by everyone else on the team. This game is very popular in India and Asia. 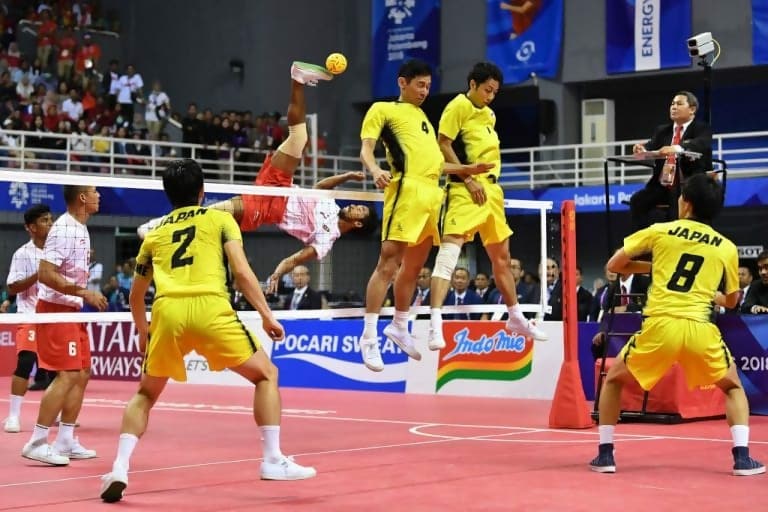 Popular in Southeast Asia, Sepak Takraw is not a game for the weak of heart. It involves a court twice the size of a badminton court and teams of three kicking a ball over a net without using their hands. 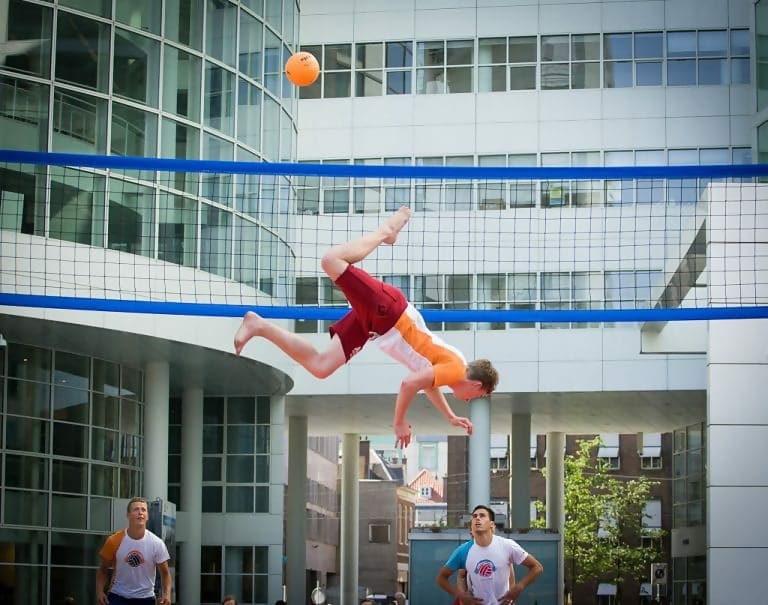 Similar to Sepak Takraw, Bossaball involves players kicking a ball over a net, but by jumping on trampolines. Teams consist of four players and combines rules from soccer and volleyball. 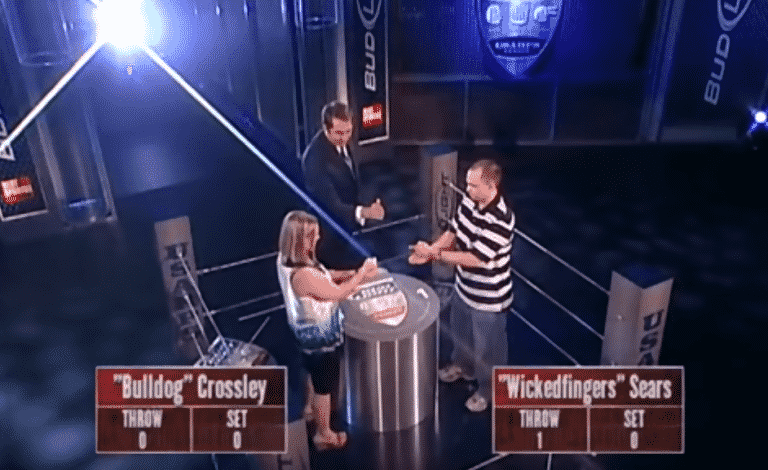 How many times have you used the rock paper scissors method to decide something with a friend? Well, in China they take the game to whole new level with Janken. The game is televised as two participants play against each other. 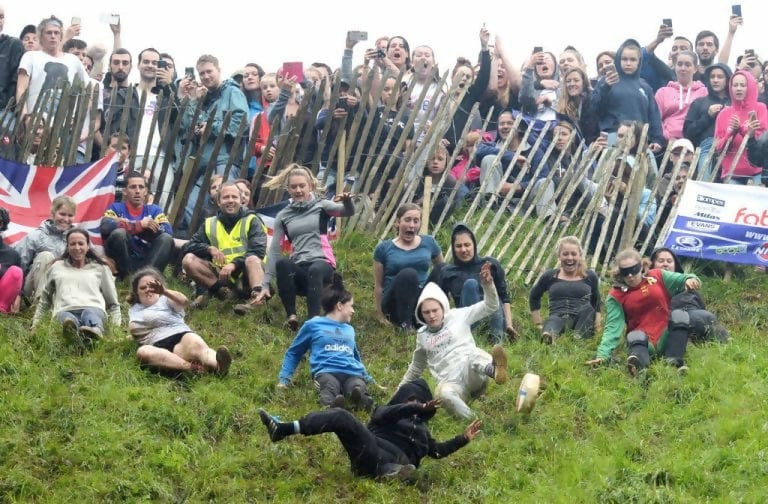 The Cheese Rolling competition takes place in England each year. It involves people chasing after a large wheel of cheese with the goal of catching it. It may sound silly, but the game is pretty intense! The wheel can reach up to 70 mph as it rolls down the hill. 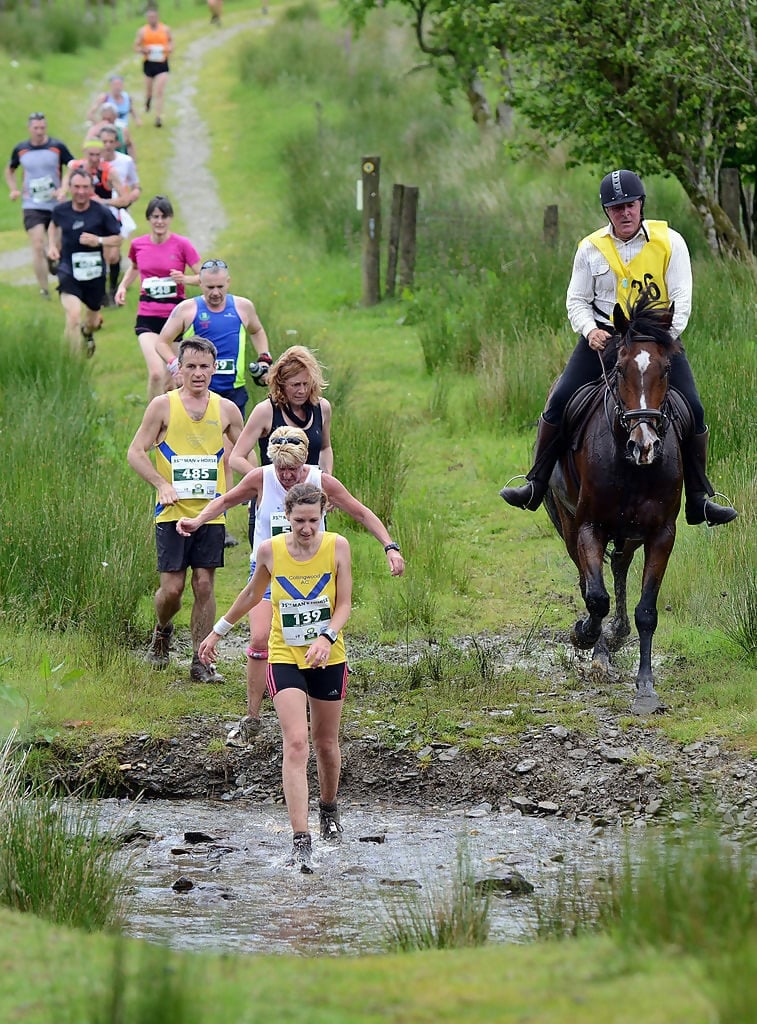 Men started riding horses for a reason. However, there will always be that one person who says that they can outrun a horse. That’s where participating in the Man vs. Horse Marathon comes in. People will try to outrun a horse during this 22-mile marathon that takes place in Wales. 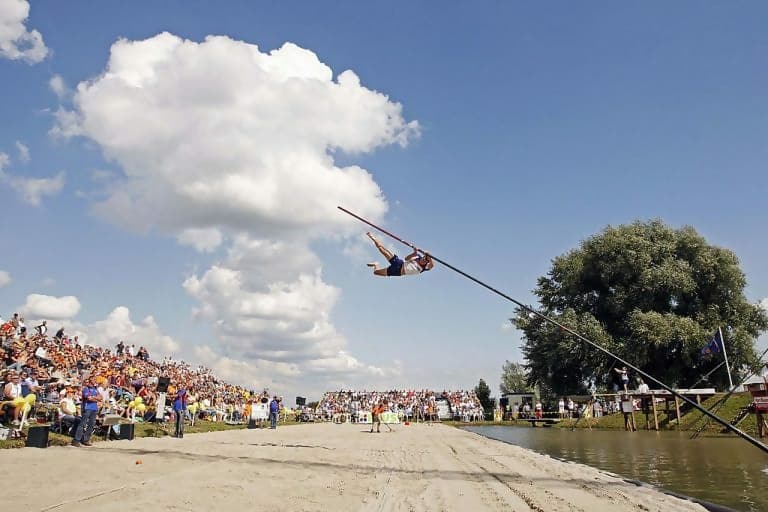 This Dutch sport is very similar to the pole vault, except the goal is to leap as as far as you can rather than as high as you can. Another difference is that participants must jump over a body of water and land on a sand bank rather than cushioned mats. 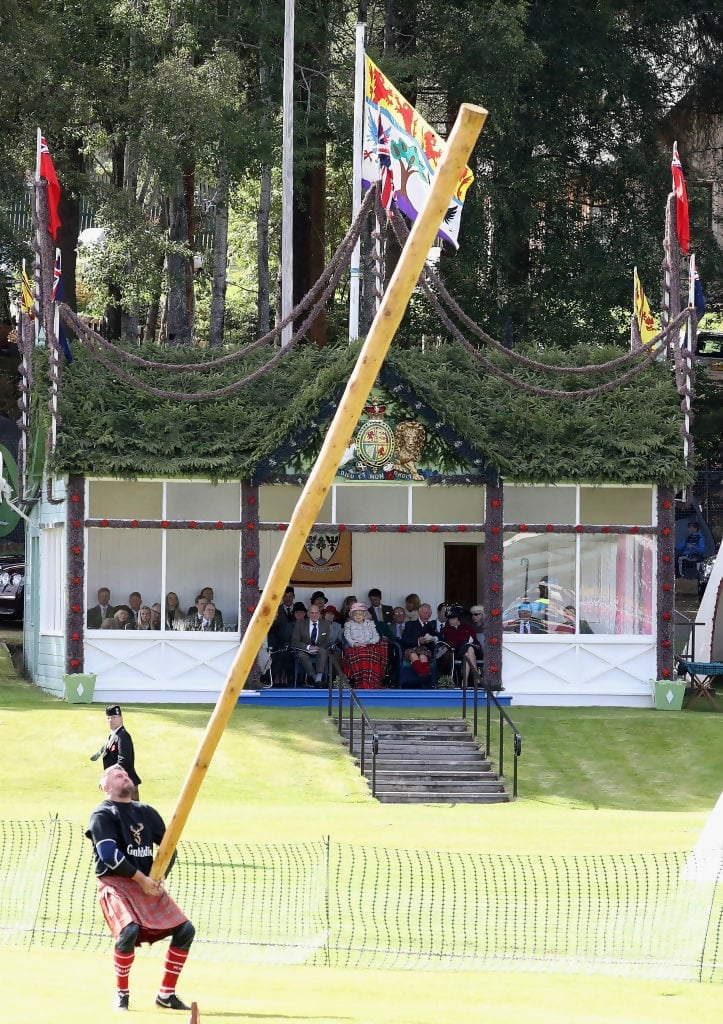 You’ve heard of the javelin toss, but now you can take it up a notch with the Caber Toss. Participants must launch a large pole with a goal to have it land flat on its top end. Ultimate strength is required to play this game. 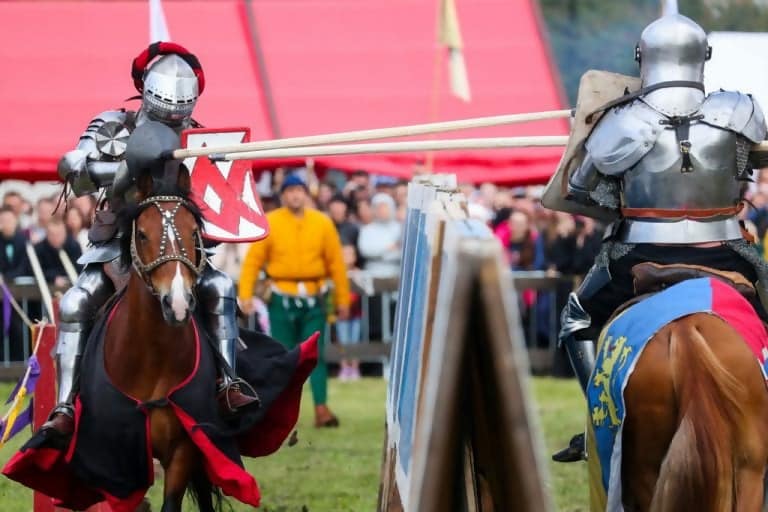 If you thought Jousting died with the Renaissance, you’re wrong! Participants will dress up in armor, ride a horse, and try to knock their opponents down using jousting sticks. It’s dangerous and very entertaining to watch. 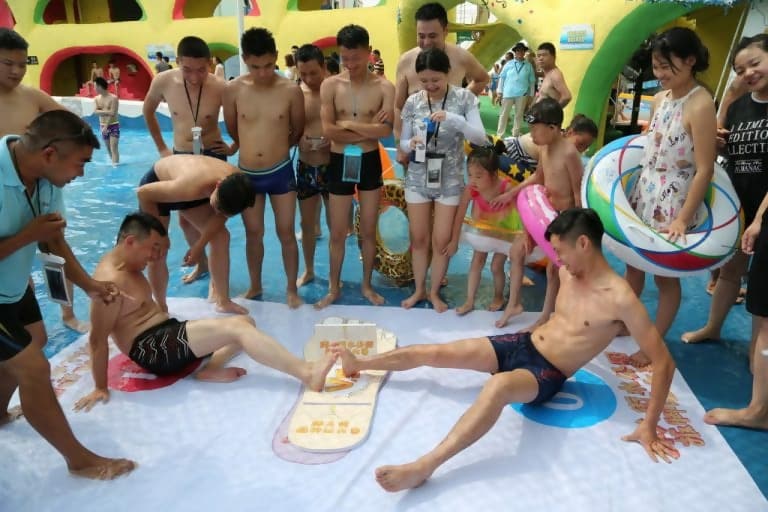 Started in 1976 England, toe wrestling became a popular sport in the country. Think of thumb wrestling, but with your toes. It sounds terribly uncomfortable, but people love it! 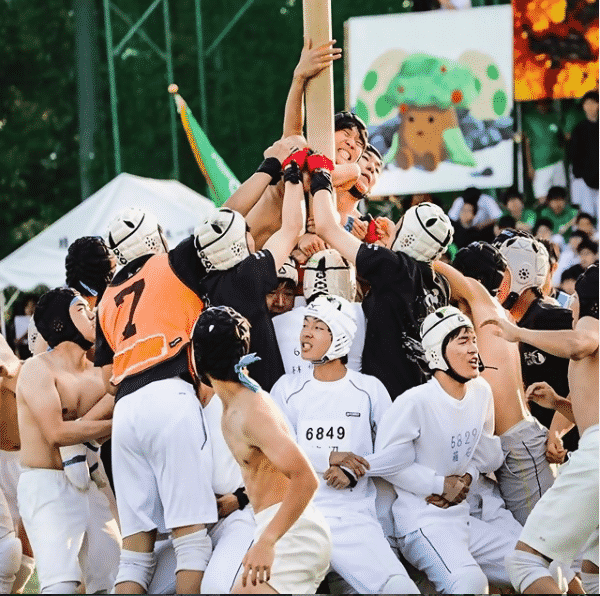 Bo-Taoshi is definitely a team-oriented sport as each team consists of 150 people! The teams are split in half and then sent off into a chaotic competition. There is a pole involved and a massive mound of people trying to get to the top of it. 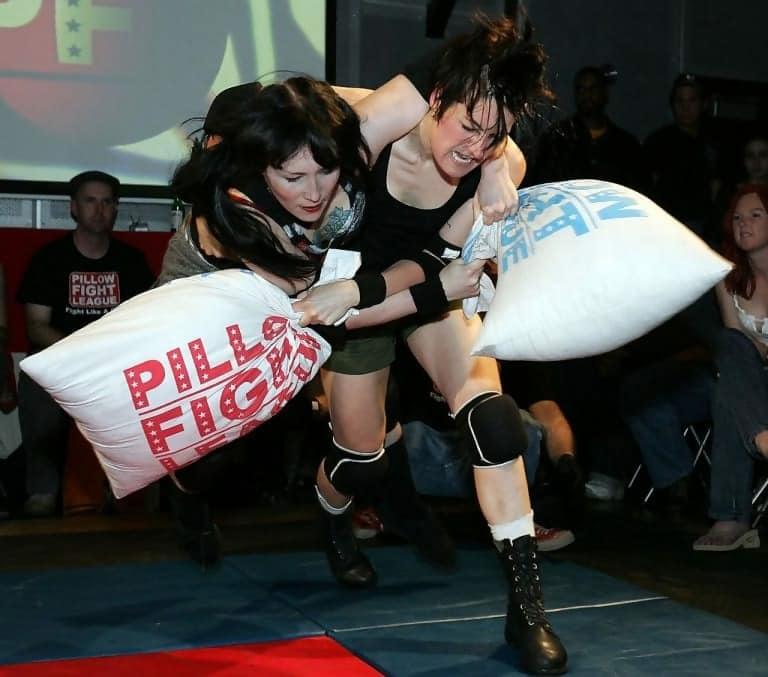 This competition takes pillow fighting away from the common sleepover and into a ring with intense players. Started in Canada, the Pillow Fight League allows for an intense game of pillow fighting that has resulted in concussions and lost teeth. 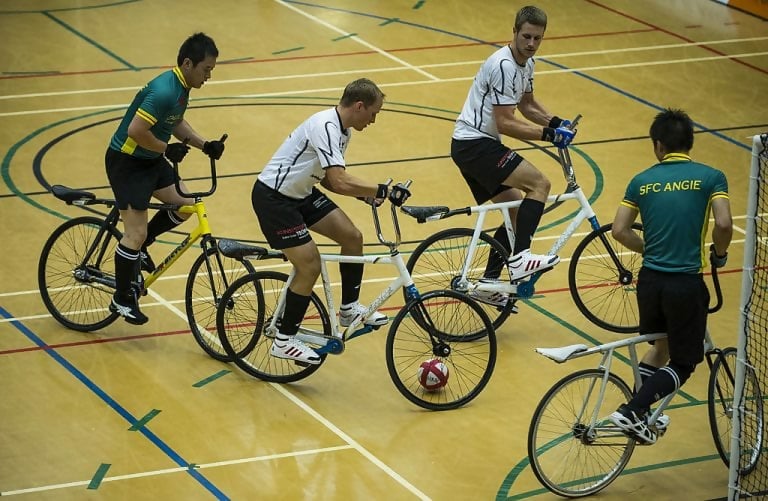 Imagine playing soccer on a basketball court while riding a bicycle. That’s exactly what this German sport consists of. While it may sound rather difficult and silly, it definitely makes for an entertaining sport. 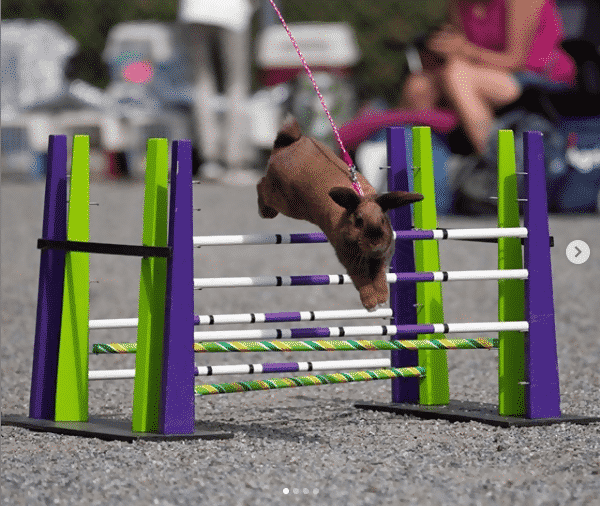 You’re probably familiar with dog shows, but have you ever heard of a bunny show? This Swedish sport involves bunnies going through obstacle courses consisting of jumps and running through mazes.

Imagine jousting without a horse and with poles made out of cardboard and you get the Cardboard Tube Fighting League. This sport allows people to have fun with the assurance that you don’t have to get hurt while being competitive. 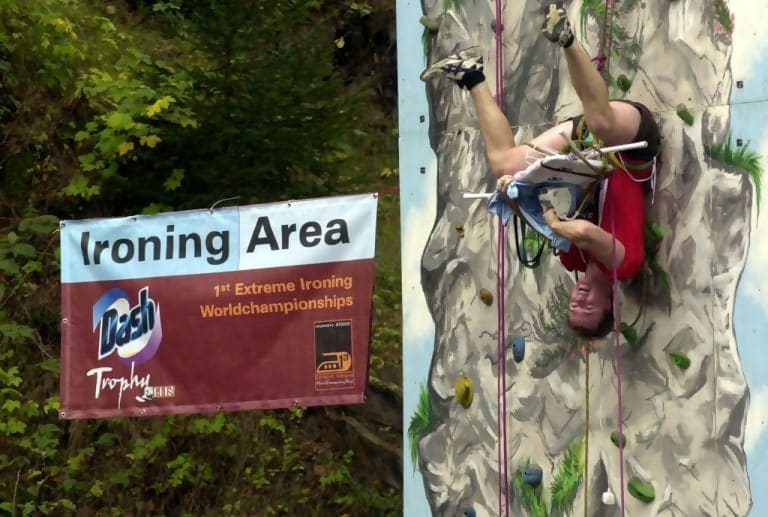 Extreme Ironing takes the thrill of jumping off a cliff and combines it with the daily chore of ironing wrinkled clothes. It sounds absolutely ridiculous but there are hundreds of participants who play the sport each year. 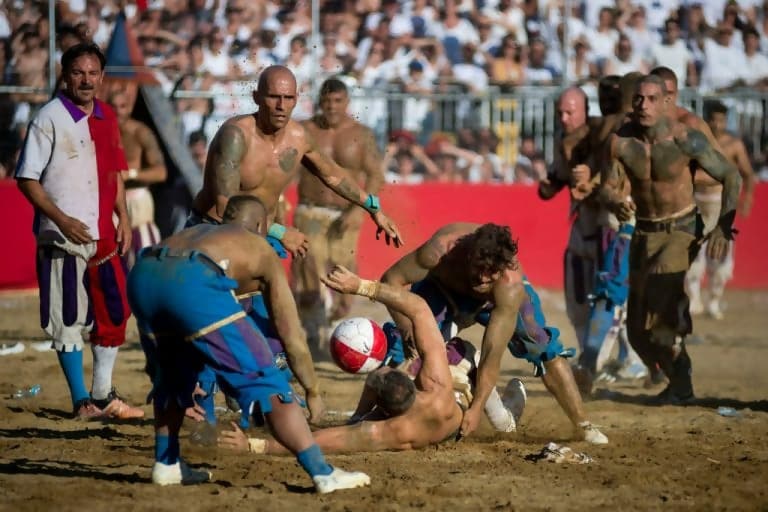 Calcio Storica is a historic version of football played by the Italians. There is no sort of protection offered to the players as they run around a field of sand or grass kicking a ball around. Oh, and fighting is completely legal. 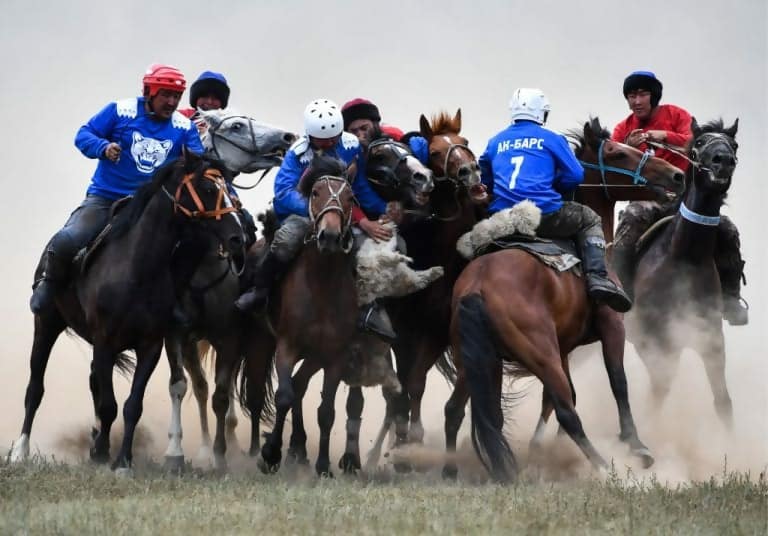 Buzkashi is very popular in Central Asia and the Middle East. The brutal sport involves riding horses while kicking a goat carcass around. On top of that, riders carry whips in their mouths to keep other players away. 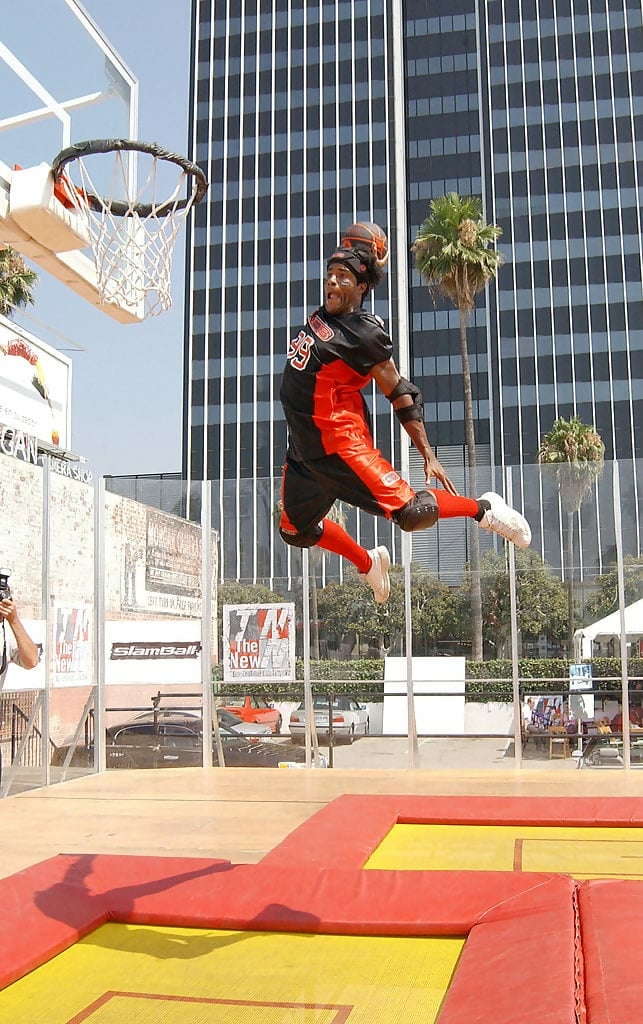 If you want to watch a rougher game of basketball, then SlamBall is for you. Players can touch each other on the court while also jumping around on trampolines trying to make a basket. Athletes can jump as high as 10 feet during this game.