For the past five years, a team of archaeologists has been studying the submerged cave systems located off the coast of the Yucatan Peninsula. Hoping to find a new set of underwater caverns, the team was shocked to discover another set of caves, that when combined created the largest underwater cave complex on the planet.

It was in these underwater caves, the team found something they could never have imagined. You won’t believe their story.

Beneath the Caribbean Coast

The underwater cave system lies beneath the Caribbean coast near the Yucatan headland, which is located close to the popular tourist destination, Tulum. The two systems the scientists were able to link are known as the Sac Actun and the Dos Ojos, and they comprise of over 216 miles of flooded tunnels.

A team of scientists was put together known as the Gran Acuifero Maya, whose main goal was to explore and map the caves beneath the peninsula. Some of the group’s members hail all the way from Washington D.C.

A Treasure Trove of Archaeology

With the two cave systems now connected, the scientists began to explore the underwater caverns, and the findings have been shocking. Beyond just discovering the world’s largest underwater cave system, the team has found a treasure trove of archaeological finds. Overall, the team has marked 200 different sites of significance with some dated back well over 15,000 years ago.

The leader of the Gran Acuifero Maya project, Guillermo de Anda, had this to say about the discoveries: “It allows us to appreciate much more clearly how the rituals, the pilgrimage sites and ultimately the great pre-Hispanic settlements that we know emerged. I think it’s overwhelming. Without a doubt, it’s the most important underwater archaeological site in the world.”

According to Anda, the findings were thanks to ten months of strenuous work as the team dove day after searching for the link between the two cave systems. Thankfully, their work ended up paying off in a big way. 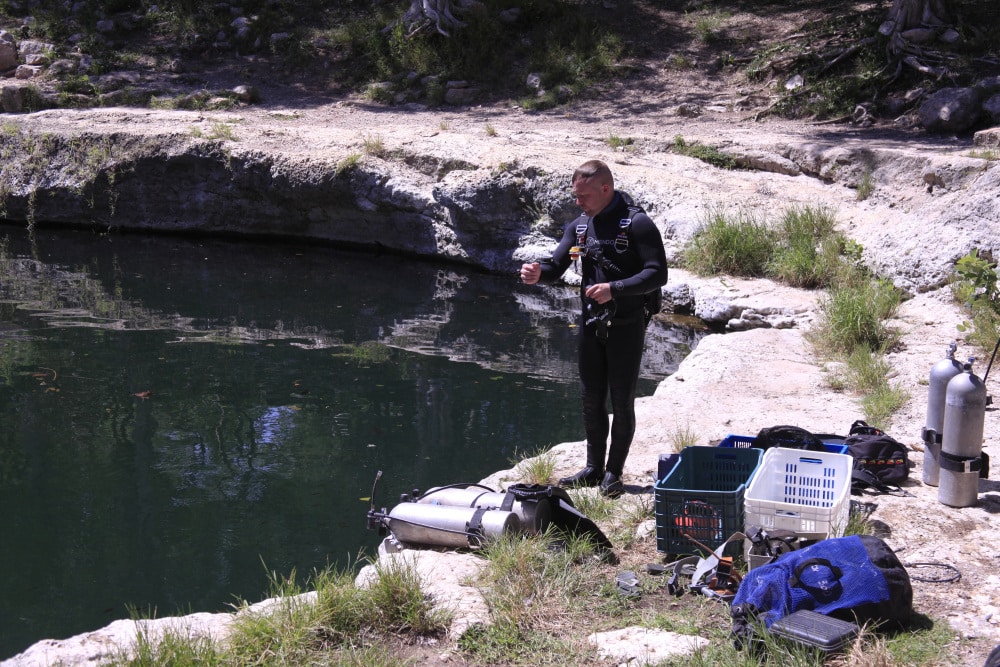 The Director of Exploration for the Gran Acuifero Maya team, Robert Schmittner was a bit emotional over the whole ideal. For him, the discovery of the link between the two cave systems was the culmination of 14 years of hard work.

Schmittner spoke to National Geographic in January 2018 about the find.“This is an effort of more than 20 years of traveling hundreds of kilometers of caves submerged in Quintana Roo mainly, of which I devoted 14 to explore this monstrous Sac Actun system. Now, everyone’s job is to keep it up.”

Home to the Ancient Mayans

It would make sense that the underground caverns would be host to a wide variety of historical artifacts since the landscape above was once home to the ancient Mayan civilization. The Mayans were known for their development of highly sophisticated cities that existed in a network. Their dynasty lasted from 250 to 900 A.D. before they abandoned the cities.

Why? That answer still eludes us to this day.

The Mayan territory stretched across most of Mexico and Central America, and the architecture is nothing short of legendary. One discovery that the team made was a series of sinkholes that were connected to the underground cave system. It was determined these sinkholes, also known as cenotes, provided water to the Mayans.

According to Mayan culture, they revered the sinkholes as gateways to the world of the dead. Many rituals were performed that revolved around the cenotes, and many human sacrifices were made to Chaac, the god of rain.

Artifacts of the Mayan Era

Why the Caves Flooded

Over 11,000 years ago, the glaciers began to melt and the water levels around the globe rose as much as 300 feet. This glacial water eventually flooded the underground caverns, creating the perfect environment to preserve anything that was inside. In fact, the diving team discovered preserved megafauna, as well as animal bones.

One of the major finds in the Sac Actun cave system was the complete skeleton of a gomphothere, which was a large animal that resembled an elephant. The bones were dated back 15,000 years. Remnants of bears and sloths were also found in the cave system as well.

Another amazing find from the Gran Acuifero Mayo project were skeletal remains of early human settlers that dated as far back as 9,000 years ago. These were some of the earliest settlers in the region.

Talk about an underwater gateway to the past, right?

Currently, out of the 215 sites that have been discovered thus far, 140 contain relics and remnants from Mayan era. A variety of man-made objects have been found, as well as a mask that represents Ek Chaub, the Mayan god of trade.

Among the other discoveries found deep within the underwater caverns, were beautifully intact pieces of Mayan ceramic art. History has revealed that the Mayans were known for their stunning pottery, which was used as vessels for the elite to drink chocolate from. The diving team also found bowls and jugs within the sediment of the cavern floors as well.

The team also found a shrine that was dedicated to the Mayan god of war and commerce known as Ek Chuaj. A stairway was also built into the side of the cenote, with ancient art depicted on the cave walls.

Despite the amazing finds, there is still so much work to do by the Gran Acuifeo Maya team. Years of archaeological study are still ahead and there are more cave systems left to explore beneath the peninsula.

It’s an exciting time, one where new connections are being forged beneath the surface.