You Have to Visit These Unusual Places in America

When people travel through America, they stick to visiting major cities like Los Angeles and New York or national parks like Yellowstone. However, America is home to some of the most unusual and fascinating places in the world that definitely deserve a visit on your next road trip. 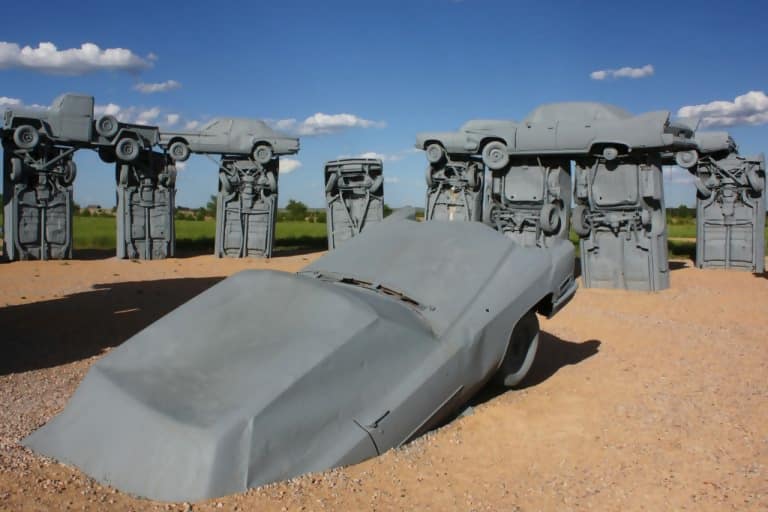 Forget about crossing the pond to see Stonehenge in England. Instead, visit Nebraska to see this rendition of the famous mysterious rock formation. If you squint and tilt your head, it’s like you’re actually in the United Kingdom. 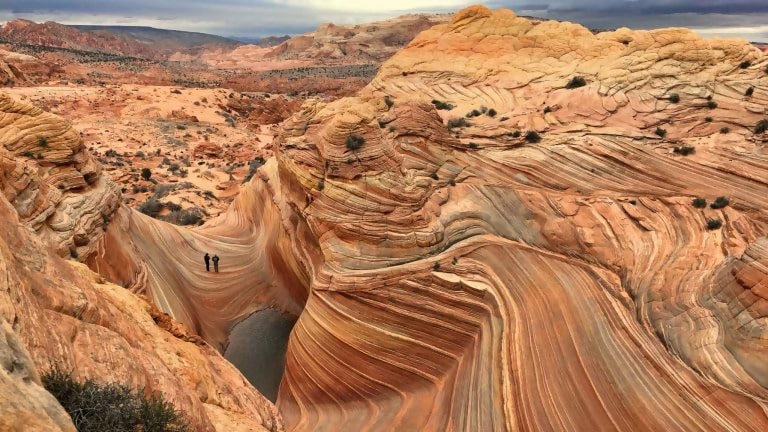 If you love getting outdoors and enjoy a nice hike, you definitely have to visit The Wave. Located between Utah and Arizona, you’ll be in awe of these incredible rock formations. 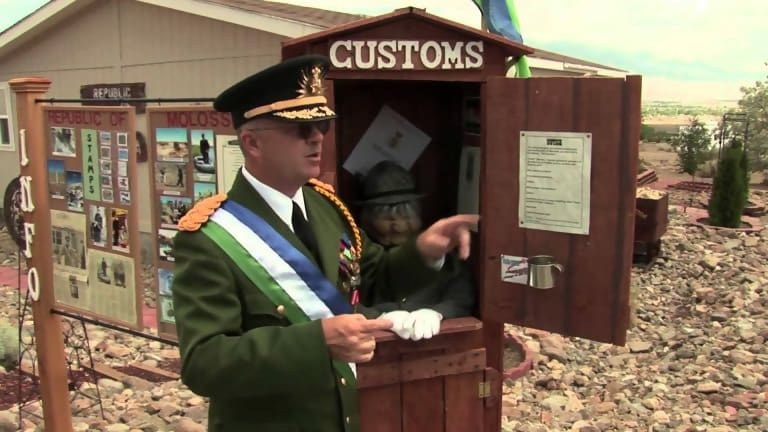 The Republic of Molossia is considered a micronation located in Nevada. Led by Kevin Baugh, they declared independence from the US. Generously, the republic offers “foreign aid” to the US, which could still be counted as property taxes. 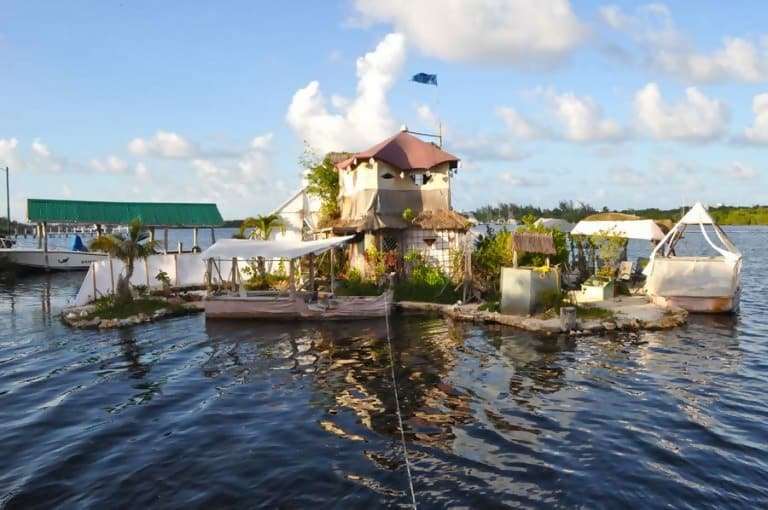 This little island is just off the coast of Cancun. The island is made up of 100,000 bottle floats. Guests can rent a place to stay for just $25 per night on AirBnB. 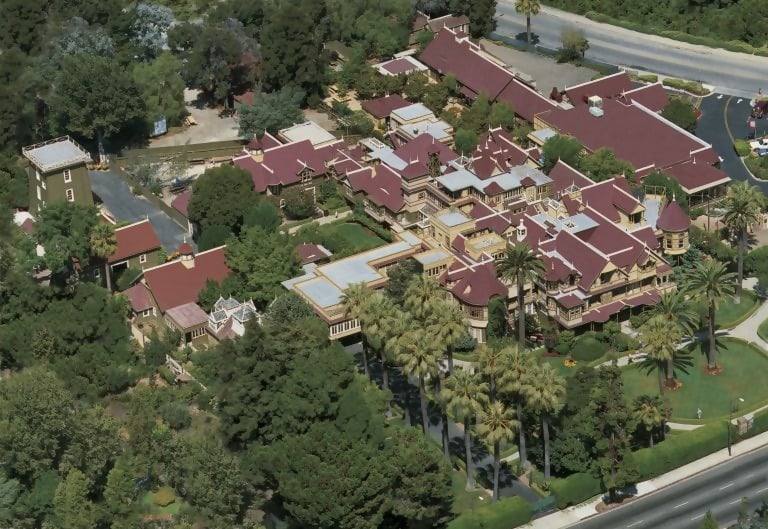 William Winchester’s home is said to be haunted by all the people who have been killed by a Winchester rifle. This massive house is unique in itself with its strange architectural design, such as staircases that lead nowhere. 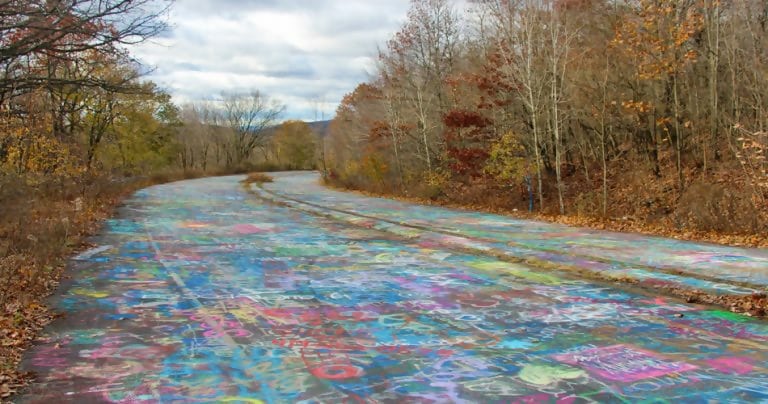 Centralia was once a thriving coal town. However, in 1962 a fire started in the mines and has been burning ever since. This ghost town only has seven people living in it currently and is home to the famous Graffiti Highway. 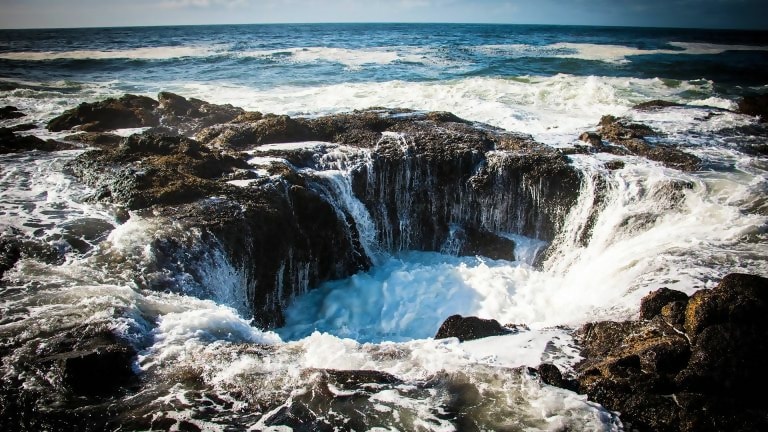 Thor’s Well is a 20-foot deep sinkhole just off the coast of Oregon. It looks like the ocean just drains into the hole. If you’re brave enough to get close enough, it offers a great photo opportunity. 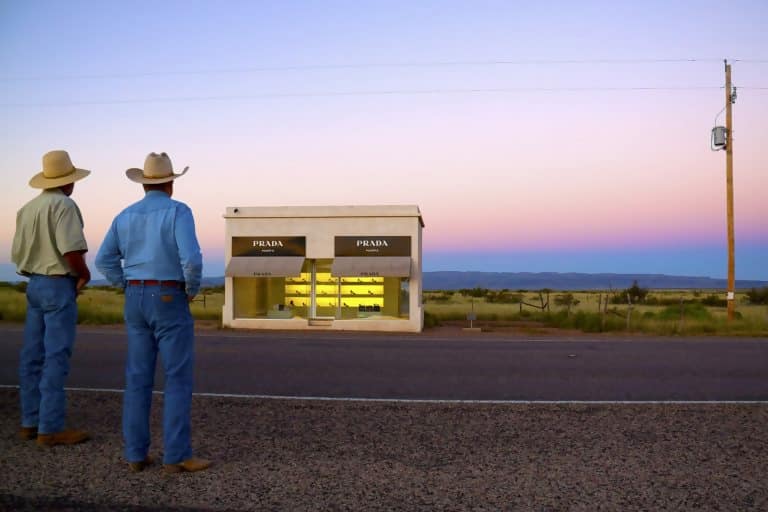 Prada, the Italian shoe designer, decided to put up an art installation in Texas. On a lonely road in Texas you can visit this Prada “store.” 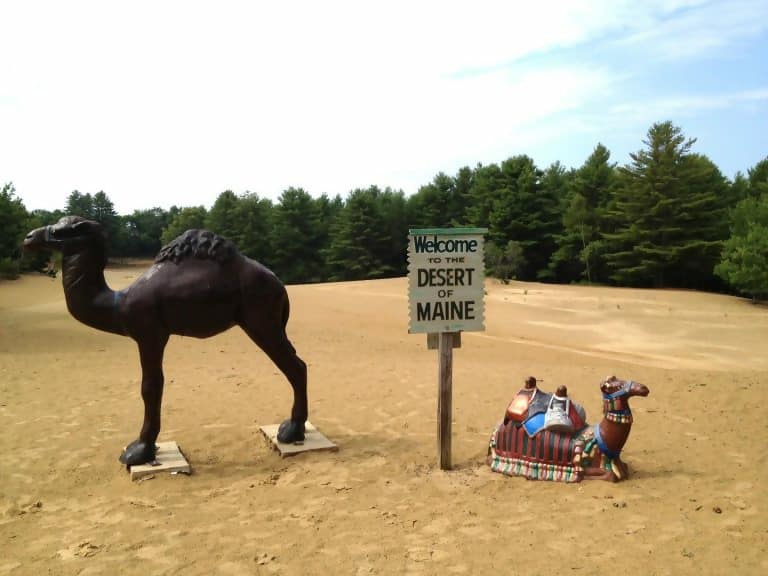 Who knew that there was a desert in Maine? Well, there isn’t. It’s actually glacial silt that takes up about 40 acres. 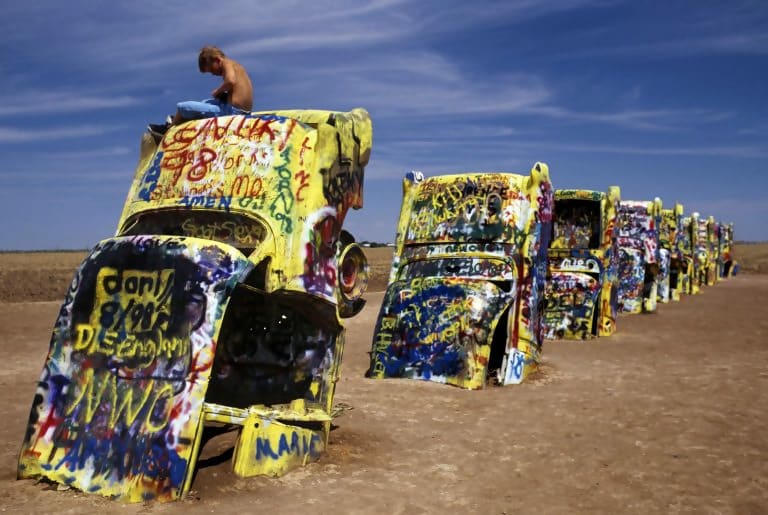 Just off the famous Route 66 you can find ten Cadillacs half buried in the sand. Anyone who drives by adds a touch of graffiti to make the art installation even more colorful. 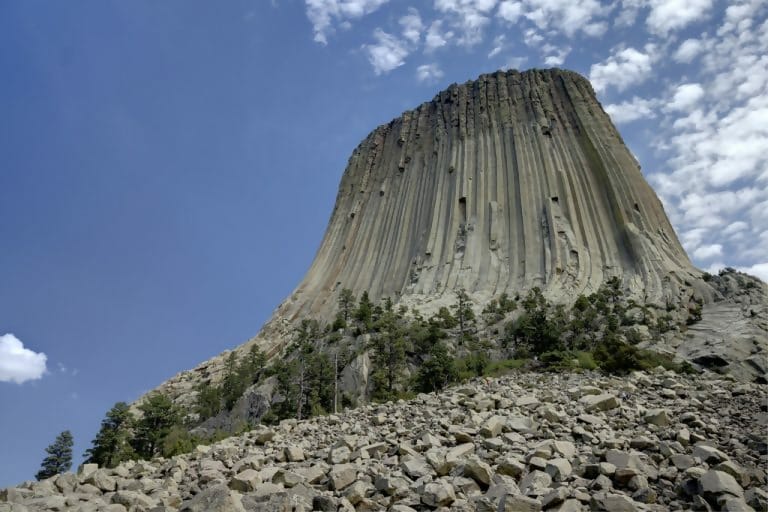 According to Kiowa and Lakota legend, the Devil’s Tower was created to save two little girls from a bear. In 1906, Theodore Roosevelt declared it a national monument. While the structure is definitely strange, it’s worth a visit. 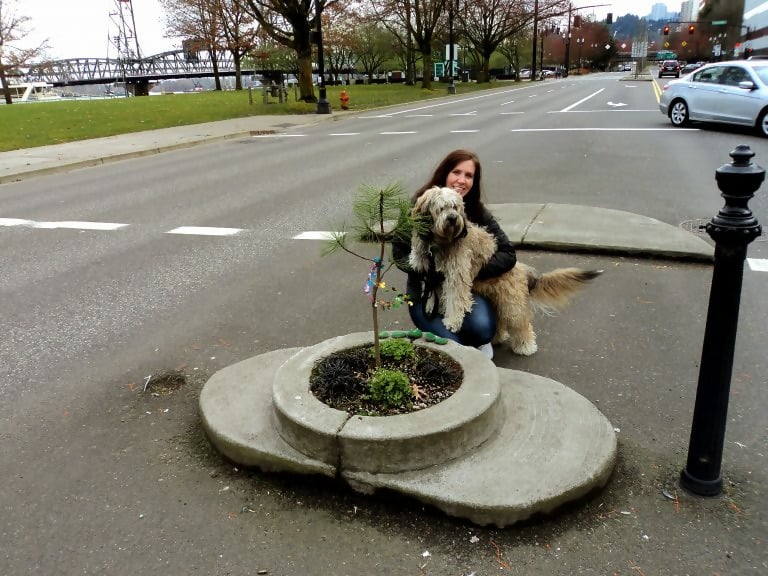 This little tree stands as the world’s smallest park. There used to be a pole in the middle of the median. Once it was removed, a journalist decided to plant a tree and some flowers there and call it a park. 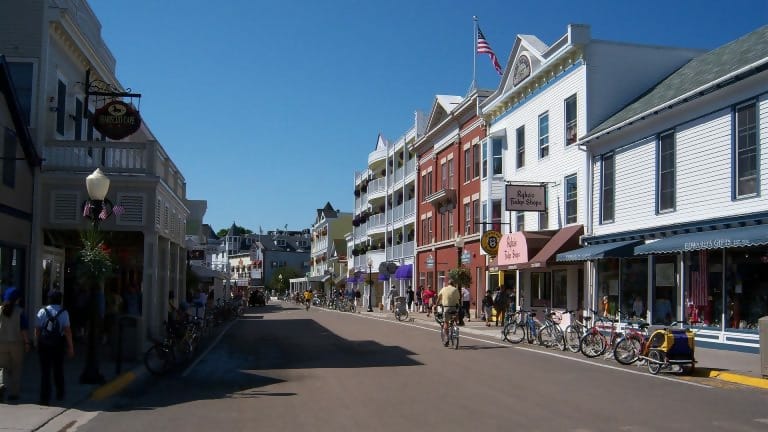 This eight-mile stretch of road has banned automobiles since 1898. When one of the residents drove their car down the street, it scared and annoyed the neighbors. So, they made it a law that cars were no longer allowed in this neighborhood. 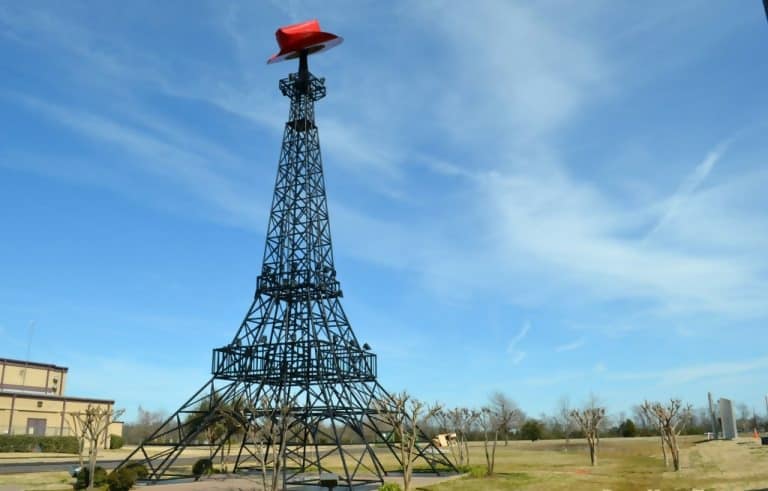 You don’t have to go all the way to France to see the iconic Eiffel Tower because Texas has one of its own. In Paris, Texas, you can see a (much smaller) version of the Eiffel Tower with a cowboy hat propped up on top. 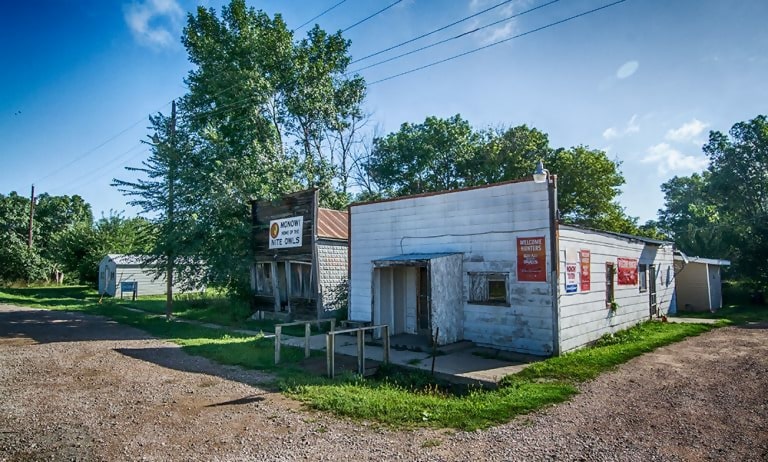 Monowi used to be a bustling town with 150 people living in it in 1930. Now, just one woman lives in this small town. If you truly want to see a ghost town, this is the place to go! 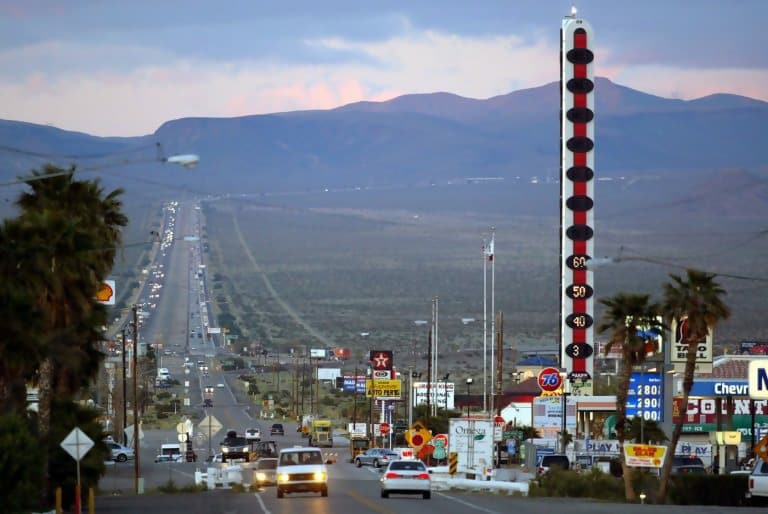 Located right in Death Valley, the world’s largest thermometer can show temperatures up to 134 degrees. It was built to honor the hottest day ever recorded in 1913. 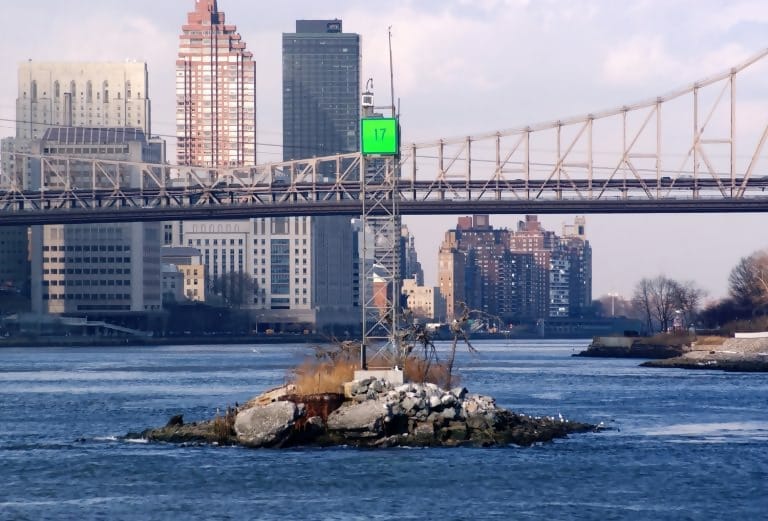 The smallest island that makes up New York was dubbed U Thant Island after a Burmese UN Secretary General. Not only is this New York’s smallest island, but it is a sanctuary for birds that are in the act of migrating. 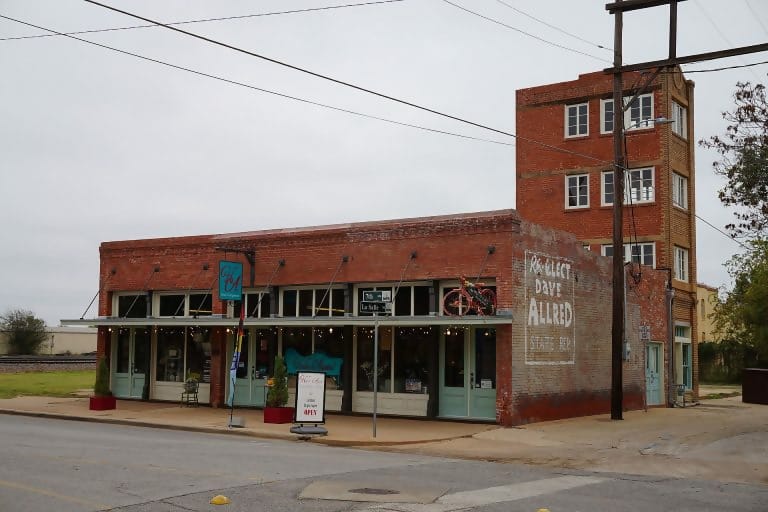 The Newby-McMahan building is the country’s smallest skyscraper. During the oil boom, con artist J.D. McMahon promised investors that he would build a skyscraper full of apartments. However, he built a 40 foot tall building and kept the rest of the money. 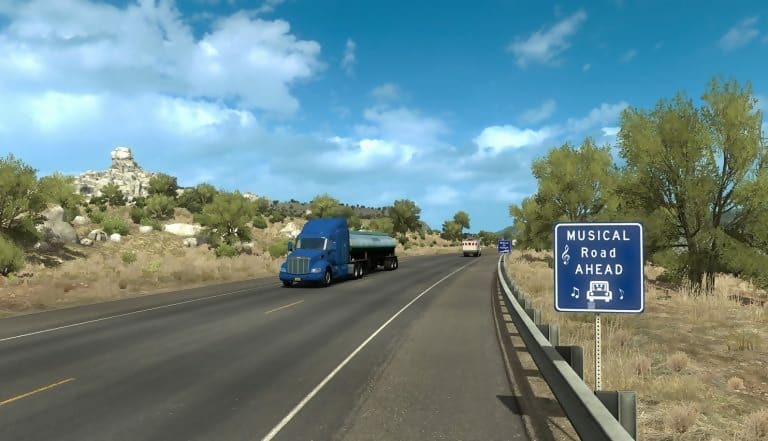 When you drive down this road in Tijeras, you’ll hear the rumble strips sing “America the Beautiful.” Make sure to go the speed limit, though to fully hear the beautiful song. 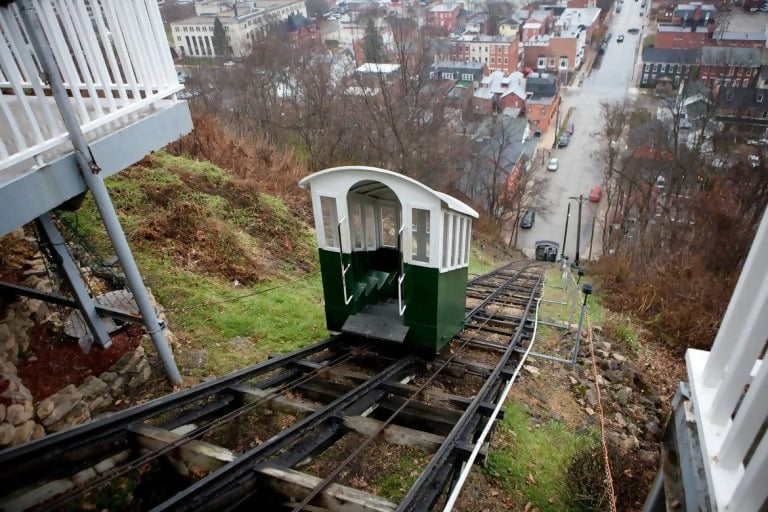 The Fenelon Place Elevator is the steepest and shortest railroad in the world. This cart brings visitors up 189 feet to see some beautiful views of Dubuque. 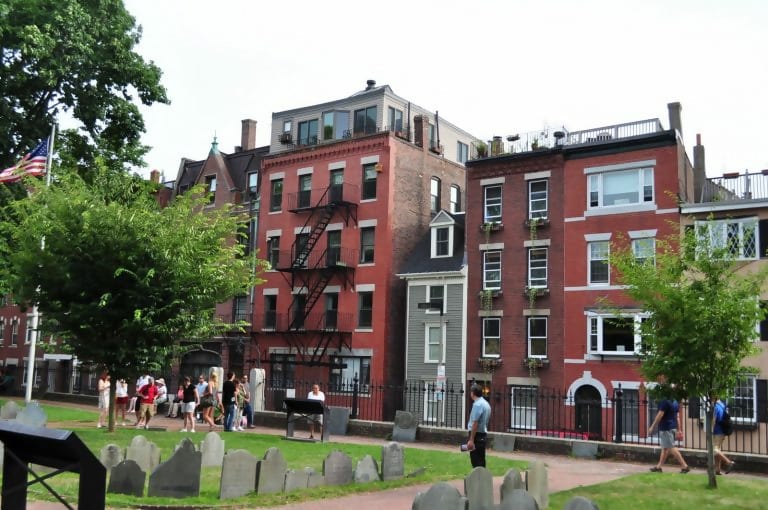 This Skinny House in Boston is just 10 feet wide. It was built to spite one of the neighbors who was known as hostile and cut the light off from his house.

This 11-foot tall bridge is not meant for trucks, SUVs, or extremely tall people. There is at least one truck per month that falls victim to this low underpass. 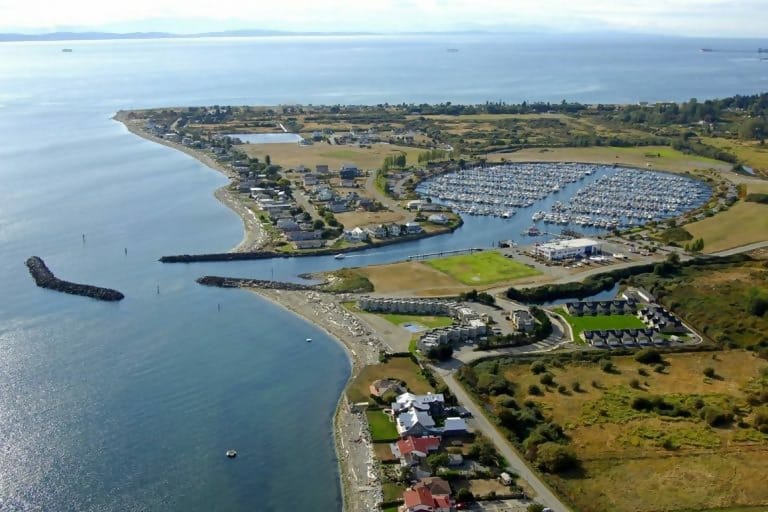 Point Roberts was created by the US and UK when they decided the 49th Parallel would be the border between Canada and the US. 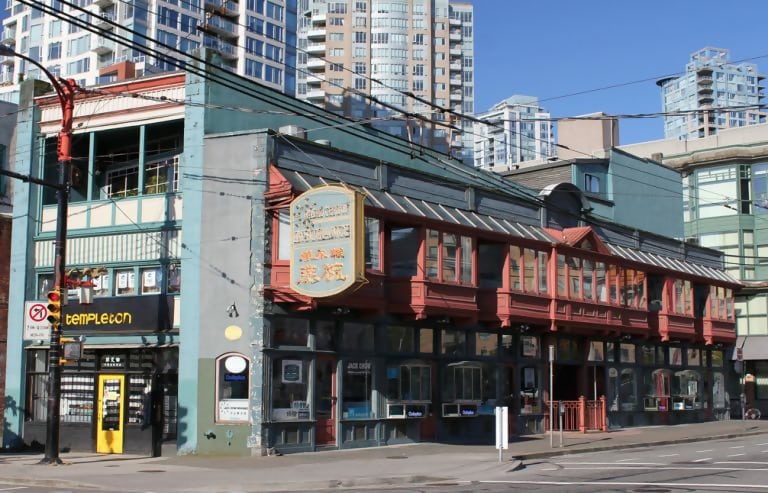 Sam Kee was a stubborn man. When he refused to sell all of his land to the city, he decided to build storefronts on it. The catch is that the commercial building is only five feet deep. 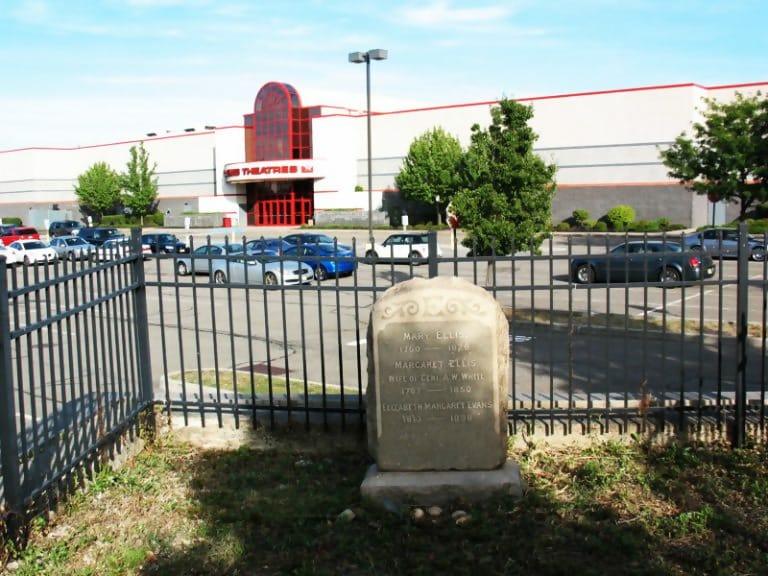 Mary Ellis was an old spinster that died in 1828. Not wanting to disrupt her grave, the AMC theater decided to include it in their parking lot. 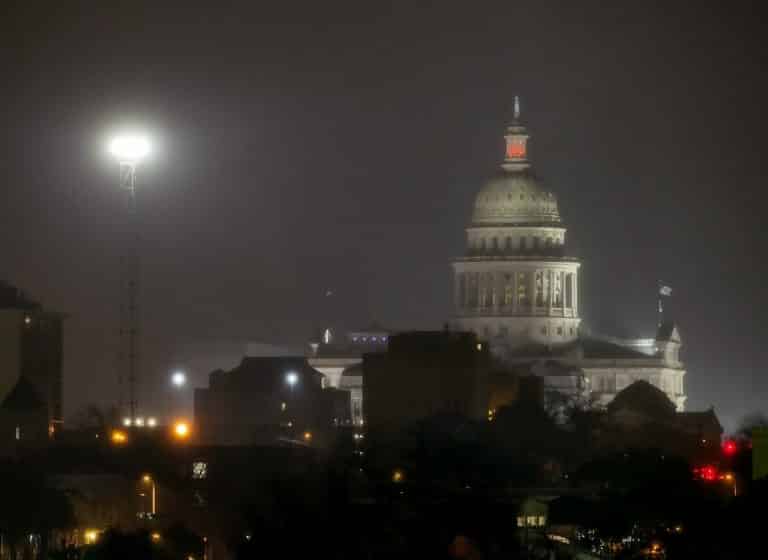 Before streetlights were invented and became popular, buildings would have arc-lamps to light up the streets at night. Austin is one of the only cities left in the US that still use these arc-lights in 165-foot towers. 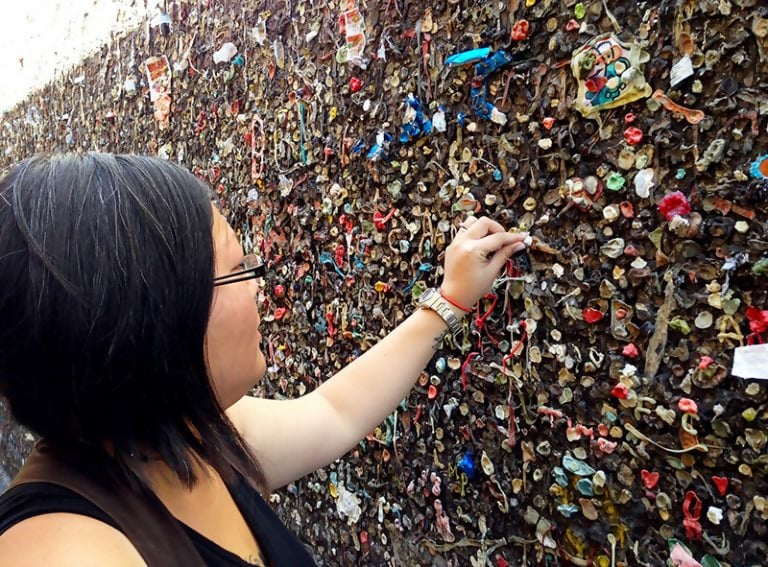 Looking for a place to stick your chewed gum? Head over to Bubblegum Alley. It has over a thousand pieces of chewed gum stuck on the alley’s walls. 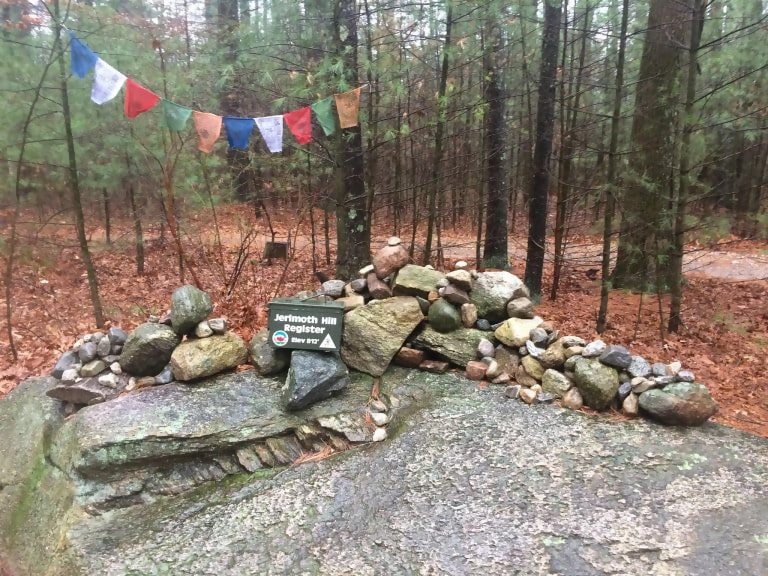 The highest point in Rhode Island is known as Jerimoth Hill. While it isn’t a long hike, only .3 miles, it has a 10-foot elevation. When hikers make their way up to the top, they will stack rocks to make the point even higher. 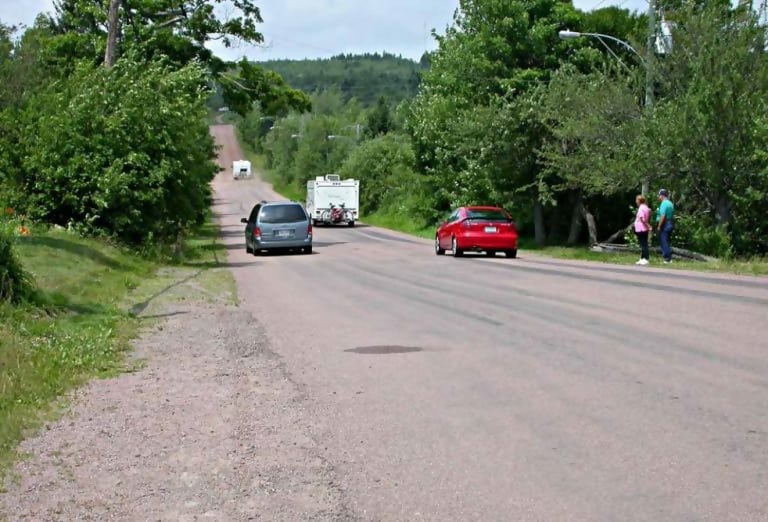 This road serves as one of the world’s best optical illusions. While it looks like the cars are driving down hill, they are actually driving up hill. You can thank the terrain for this illusion. 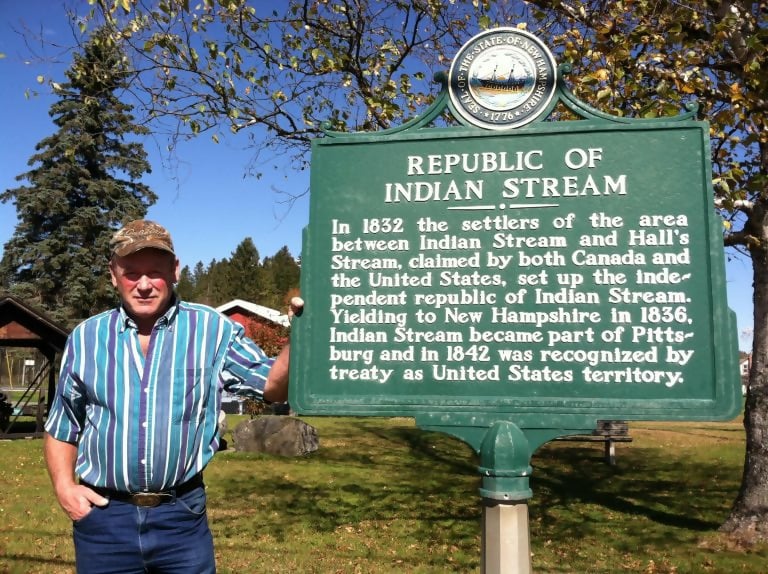 Between the border of Canada and the US, a small republic of 300 was founded in 182. It even had its own government officials. However, the republic only lasted until 1842. 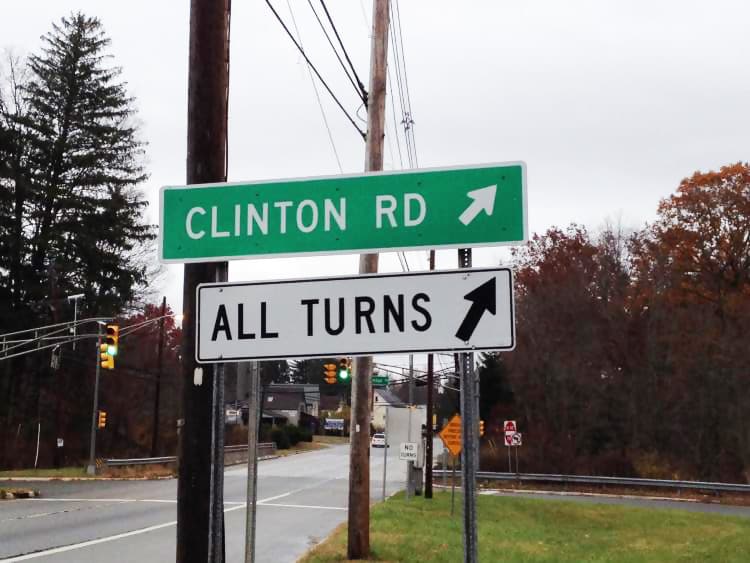 Not only is Clinton Road known for having an extremely long traffic light, but has been the spot of multiple ghost sightings. Some people even claim to have seen strange creatures and witches here.