Sweet Dog Realizes His Family Saved The Life Of A Sick Stray Dog, Brings Food From Her Own Bowl To Share With Him

Dogs are so amazingly sweet and pure that sometimes it feels like we don’t deserve them. When one stray dog was brought to his new home he was in pretty bad shape. Luckily, there was another dog that was willing to help out. You won’t believe the sweet act this dog performed to help make the new one feel comfortable.

Back in 2016, Jessica Rojo Savard was scrolling through Facebook posts, like most of us do. However, on this particular day, Savard happened to come across a post that immediately broke her heart. It was impossible for her to ignore.

The post Savard came across was one that would upset anyone with a huge heart for animals. There on her screen was a tiny, emaciated, mange-ridden dog that was rescued off of the streets of Mendoza, Argentina.

The animal rescuers were on the lookout for the perfect family to adopt this poor, stray dog. As she came across the post, Savard immediately felt pulled toward the dog. She knew she wanted to be the one to adopt the dog.

Savard already had a cat and a dog. She hadn’t been on the lookout for a new pet, however, she knew in her heart that this tiny dog was meant to be hers. The dog in the photo had captured her heart.

For the first few weeks, the tiny pup remained at the vet clinic to get treated for its mange. Finally, the pup’s mange was no longer contagious. This was great news as Savard could finally bring the dog home with her!

Savard headed to the vet’s office for her first meeting with the pup. The small pup was still very skinny and the secretary working there commented that the dog looked like a meerkat. This inspired Savard to name the pup after the meerkat from “The Lion King.”

The pup now had a name: Timon. However, Savard soon shortened it to Timmy. Finally, little Timmy was going to his new forever home. However, it was going to take a lot of love and care to help him get better.

Even though his new home environment was loving, Timmy didn’t feel comfortable. In fact, the poor pup was absolutely terrified of everything! Whether it was a broom or Savard’s other pets, Timmy would cower in fear.

It was obvious from Timmy’s behavior that he had once been abused. Jessica’s other dog, Juanita, instantly sensed the poor dog was in need of some TLC. However, every time Juanita tried to befriend Timmy, he would just run away.

What was the secret method to get Timmy to open up? It happened to be a dog’s favorite thing: food. It all started when Timmy would not so secretly look over at Juanita’s dish of food. 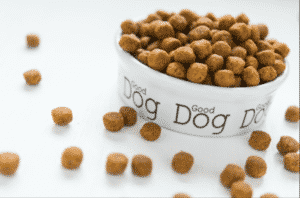 “I kept Juanita’s food on a chair so that Timmy did not binge eat and be sick to his tiny stomach, so after devouring his portion, he would stare sadly at Juanita on the chair,” Jessica told The Dodo. Soon, Juanita noticed Timmy staring.

Juanita decided to prove the old saying, “Sharing is caring,” true. “Juanita took food from her dish, placed it on the chair and nudged it to the floor,” Jessica said. “It was truly humbling to witness.” Soon after this act of kindness, Timmy began to open up. 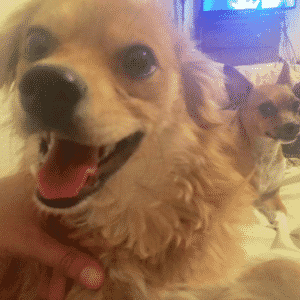 Soon Timmy’s shy personality took on a one-eighty, as his shy demeanor soon changed into an outgoing and loving dog. Timmy began to put on a healthy weight and his coat began to shine. Everyone was amazed by his transformation.

Juanita and Timmy’s friendship continued to flourish as the two of them became closer. They love spending time together now and even share a bed! Then in 2017, Savard added a new addition to the family!

In 2017, Savard gave birth to a beautiful baby girl she named Julia. Julia is now 11 months old and has the sweetest relationship with Timmy. Timmy absolutely adores the little baby! 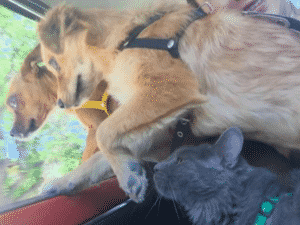 “They are the best of friends, up to the point that I feel a bit left out,” Jessica said. “Sometimes Julia would push me aside to get to him or Timmy will climb over me to reach her.” 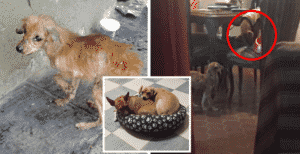 Timmy had undergone a huge transformation since he was brought to Savard’s house. The once shy and reserved dog is now playful and cheerful. This wouldn’t be possible without Savard’s love.

Thanks to Savard’s dedication and unconditional love, Timmy has managed to make such great progress. However, we also can’t forget Juanita who showed Timmy that friendship without strings attached is possible. 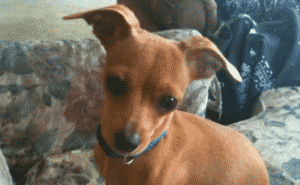 Timmy is now fully accustomed to his life with his family. It is amazing how love and care can completely change the life of one small animal.